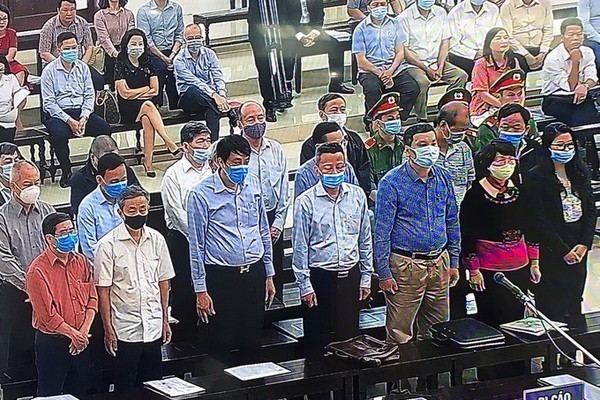 The Thai Nguyen Cast Iron and Steel Complex was the ‘first child’ and the pride of Vietnam’s metallurgy sector. Tisco was once a strong brand in the industry. But since 2018 its performance has steadily declined.

Many managers of Tisco and the Vietnam Steel Corporation (VnSteel) had to appear before the court and were given severe punishments because of wrongdoings during the implementation of the second phase of the project.

On April 20, after more than one week of hearings and deliberation, the Hanoi People’s Court sentenced 19 defendants who were once VnSteel and Tisco managers.

Tran Trong Mung, former CEO of Tisco, was sentenced to nine years and six months in prison, while Tran Van Kham, who was chair of the board of management and CEO of Tisco, got eight years and six months; Mai Van Tinh, former chair of the board of management got six years, and Dau Van Hung, former CEO of VnSteel, got three years in prison for "violating regulations on management and use of state assets, causing losses and waste".

The other defendants were sentenced to 18 months in prison, but they received a suspended sentence on the same count, for "lacking responsibility, causing serious consequences".

Soon after the hearing finished, Tisco asked for permission to restart the project and submitted a plan to revive the second phase of the project.

Tisco’s leadership believes that if the outstanding problems of the second phase of the project cannot be solved, the company will face serious difficulties.

Most of the equipment needed to implement the second phase of the project was bought by MCC, the Chinese contractor. The equipment is being kept by Tisco. However, storage over such a long period will damage the equipment.

Tisco is one of the 12 loss-making mega projects under the Ministry of Industry and Trade (MOIT). The assets of the projects total VND59.1 trillion, while total accounts payable is VND63.3 trillion.

Tisco managers affirmed that if the second phase of the project cannot be reactivated soon, the company will find it hard to maintain production.

If production halts, nearly 4,000 workers will lose their jobs, affecting the life of 20,000 people. This will lead to a loss estimated at VND1.2 trillion) for the state, while commercial banks will not be able to collect debts.

This will also affect hundreds of Tisco’s partners, suppliers and customers across the country.

Tisco’s managers said that the technology used for the second phase of the project is modern. Some equipment has been installed, while the remaining has been maintained well and can be used.

If Tisco cannot resume implementation, the quality of the equipment will degrade. It also still has to pay loan interest, which leads to higher costs.

If the situation lasts for a long time, the company will not be able to maintain production, and could go bankrupt and lose the state’s and shareholders’ money, while banks won’t be able to collect debts.

Tisco has asked many times for help to solve these problems, which are now beyond the company’s competence. But the proposals have not received replies.

Vietnamese startups secured $855 million in fresh funding in 2022, which is only one-third compared to the value in 2021, according to a recent report by Nextrans.