Steel prices spiraling out of costs amid electricity price adjustment

The retail electricity price increase has dealt a strong blow to the steel manufacturing industry, which is facing difficulties. 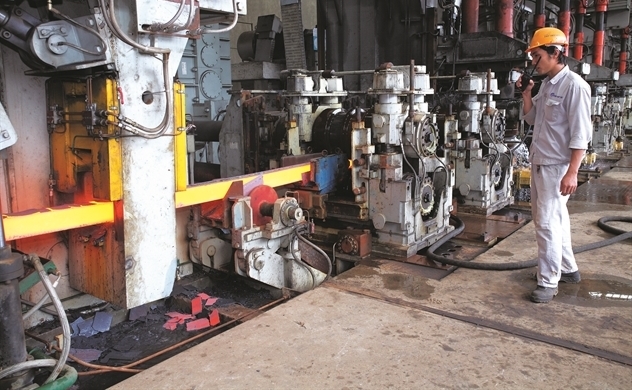 Analysts predicted that the steel prices in the domestic market would continue rising in the last months of the year because the Chinese steel price has recovered, and bank loan interest rates and input material prices are increasing. If so, this will affect the implementation of real estate projects.

The domestic market cooled in the first two months of the year. According to the Vietnam Steel Association (VSA), the steel output increase was modest, 9.9 percent, compared with the same period last year (3.8 million tons). The consumption level increased by 19.9 percent (3.6 million tons), mostly attributed to the export increase of 19.9 percent.

VSA has projected a modest 10 percent growth rate of the steel industry this year as the peak growth period is over.

Goldman Sachs predicted that the steel demand in the world market would decrease by 5 percent. In Vietnam, analysts do not think there are positive prospects for steel enterprises this year.

FPT Securities commented that with the strong rise of protectionism in other countries, steel prices are likely to be divided. As the supply in Vietnam increases significantly, the price will be under pressure of going down.

However, this isnt bad news for everyone. Analysts said the recent electricity price increase of 8.36 percent will have big impact on steel mills using EAF (electric arc furnace), such as Pomina and Vina Kyoei.

According to VSA, the output of the mills using EAF amounts to 65 percent of total domestic output. With the technology, the electricity consumption level is 600 kwh per ton, while the expenses for electricity account for 8-9 percent of total production costs, much higher than the 5 percent for BOF mills.

Therefore, analysts predict that Hoa Phat, one of the biggest manufacturers, has an opportunity to expand its market share thanks to lower production costs than its rivals.

Hoa Phat now can self-supply 40 percent of total electricity it needs as it can exploit the heat produced during the coking process to run a thermopower plant.

The Vietnamese steel market is still being eyed by foreign investors. Taiwanese Tung Ho Steel has received a license to make ingot steel and HRC with the capacity of 1.6 million tons.