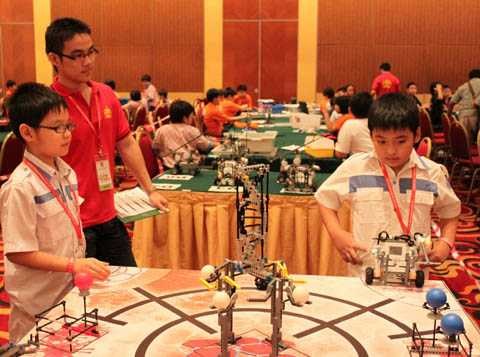 Of the 187 authors who wrote 45 textbooks, including 15 for primary education and 30 for secondary education, there are 145 male and 42 female authors. In written articles, of the total number of characters described (in both names and common nouns), the researchers found 182 male characters and only 98 female characters.

In most articles, male characters are more frequently mentioned than female characters and the biggest difference can be seen in informatics, biology and physics textbooks. More men than women men were found in the images in textbooks.

Of the 8,000 images that appear in the textbooks for students from first to 12th graders, only 24 percent are female. The difference in the frequency between male and female  tends to increase at higher education levels.

Giang and her co-workers also found that in STEM textbooks, the appearance of both major and supporting characters show that women often engage in simple, less demanding careers.

The 45 surveyed textbooks mention 66 famous scientists in both articles and images, and all of them are men.

“There is absolutely no woman who is researcher or scientist,” Giang said.

She believes that it would be better to have textbooks specifically designed for STEM education, in which there should be more images with the appearance of girls and women in the lessons.

The role of girls and women in the society needs to be more truly reflected in textbooks. Huong emphasized that textbook compilers need to consult with agencies and organizations to be sure that the textbooks will pay appropriate attention to gender equality.

STEM education is just at the very beginning in Vietnam.

Do Hoang Son, director of Long Minh Culture & Education JSC commented that the STEM education has just moved from ‘zero’ to ‘a little’.

Students at some schools have begun learning science with practice lessons and experiments. Some STEM clubs have been set up at schools. There are not many STEM competitions for students nationwide.

Dang Van Son, director of S3 Academy for Creation, commented that Vietnam still doesn’t have overall research on STEM to discover if STEM education is necessary for Vietnam.

STEM education can succeed at schools with poor conditions