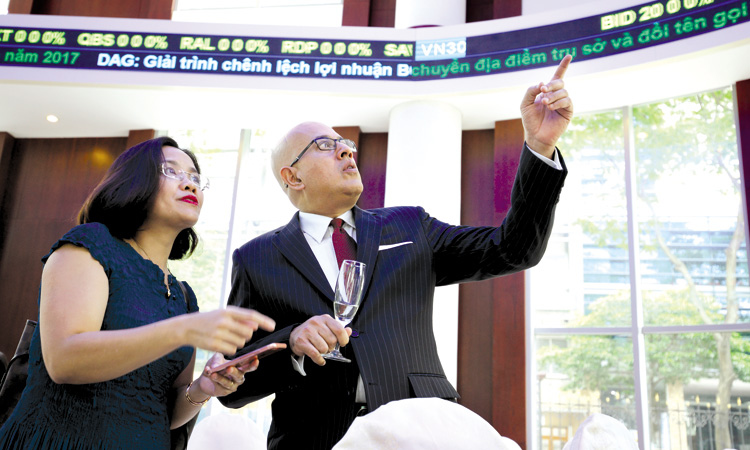 The high GDP growth rate, the government’s new policies and foreign capital flow are the three factors behind the strong rise of the stock market in 2017.

A report found that foreign investors bought $1.87 billion worth of stocks and bonds in 2017, increasing their portfolio value to $40 billion.

According to the General Stastistics Office (GSO), 5,002 deals were made by foreign investors who contributed capital and bought into Vietnamese businesses, worth $6.2 billion reported in 2017.

The sharp increase of foreign capital flow in 2017 helped push the VN Index by 48 percent and HNX Index by 46 percent. This helped increase market capitalization value to $124 billion, or 68.5 percent of GDP.

The upward trend continued to be seen in the first three weeks of 2018 with the VN Index gaining another 78 points, which means an increase of 7.9 percent after 14 trading sessions.

The cash flow from foreign investors continued to be a psychological support for the market with a total net buying of VND7.136 trillion. Analysts noted that the foreign investors’ net purchase in the last few days was equal to that of 2014.

The analysts believe that the cash flow from overseas will continue rising this year if the dong/dollar exchange rate is not adjusted by more than 2 percent and the inflation rate is at 4 percent.

Foreign capital has been flowing to many different business fields.

According to Business Korea, in 2017 South Korean investors poured $434 billion into 11 funds which invest in the Vietnamese market, not including ETF.

An analyst said that foreign investors rushed to buy stocks recently because of the expectation of the Vietnamese market being upgraded from frontier to emerging, which may occur in 2018.