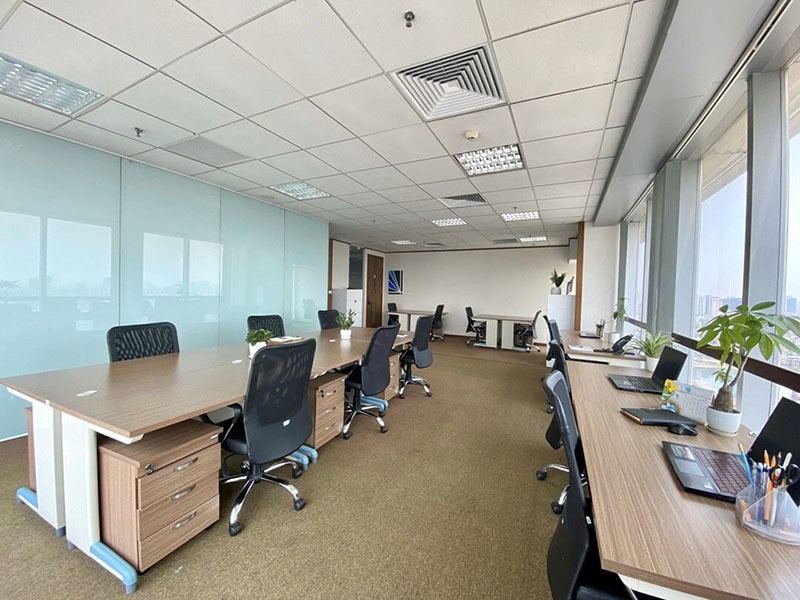 Ngo Anh Tuan, director of a transport firm in Hanoi, said its 5-year lease contract is expiring in some days but they still have not reached an agreement with the landlord about the rent.

Tuan’s company is leasing a 200 square meter floor for an office with rent of VND50 million a month. His company has been seriously hit by the pandemic over the last two years. Because of the poor business performance, he has laid off many workers and has tried to re-negotiate with the landlord about rents and leasing areas.

“I want to extend the leasing contract, but want a smaller area. But the landlord did not accept this. Later, I sent an email asking for monthly rent reductions, but there has been no reply,” he said.

The office is in a C-class privately run building in Thanh Xuan district in Hanoi. The vacancy rate of the building is relatively high because many businesses have shut down because of the pandemic.

Tuan believes the landlord is refusing to cut rent because there are few tenants at this moment.

“If we cannot reach an agreement about new rent, I will give back the premises and look for a smaller office to lease,” Tuan said.

Do Manh Hung, who works at a company providing training courses on life skills, said his company has not been operating for many months. Training centers have closed the doors, and employees are working from home. It still has to pay for security guard services and electricity and water bills.

Hung said the landlord refused to lower the rent.

“The landlord only accepts payments twice a year, instead of once a year as previously applied,” he said, adding that the landlord is deliberately putting difficulties on the company.

Hung doesn’t want to relocate the office, because the current office has become well known to clients.

Landlords are also having difficulties because of the pandemic.

Do Van Ha, the owner of a building in Thanh Xuan District, said he still has not paid a loan he got from a bank to build the office building.

In 2017, with VND15 billion, plus VND5 billion he borrowed from a bank, he built a 10-floor building on the land plot valued at VND100 billion, for lease.

The office building had just become operational for a short time when the pandemic broke out. Over the last year, he has not been able to lease any space, and many tenants have given back the premises before the contract expired.

“I know that lessors and lessees need to share difficulties in the current period. But we are under pressure. There are very few tenants, and we still have to pay bank debts. If I cannot pay debts, the banks will foreclose on the building as the mortgage for the loan,” he said.

Ha said instead of reducing rent, he supports tenants in service fees and offers flexible payment conditions. Despite the offers, more companies are leaving.

The owner of a building in the Trung Hoa – Nhan Chinh area in Cau Giay District in Hanoi said that the building rent is low compared with other buildings in the same area. So he won’t reduce the rent.

Some months ago, analysts said that the impact that Covid-19 had on the office leasing market was less than on the hotel market. However, office building landlords also complain about the lack of tenants and their debt payment capability.

Hoang Nguyet Minh from Savills Hanoi said renters are uncomfortable about making decisions on leasing offices now. Site survey and interior construction activities are also facing difficulties. Most businesses are deciding to extend leasing contracts or postpone their plans to relocate until the pandemic is contained.

She said that the slowdown of the office market segment in the second half of the year will see a decrease in the leasing rate.

She believes that office rents won't be affected after the pandemic ends. The requests to lower rents come from tenants during social distancing when travel is restricted and workers cannot go to the office.

In the long term, the current leasing fee in Hanoi will reflect the market value and capability of tenants. So a mass decrease in office rents won’t occur, she believes.

To better control costs, some enterprises have left traditional offices to shift to flexible office models. So the pressure on landlords is high. However, Minh said that the rent of serviced office buildings is always higher than rent for traditional offices.

Multi-million dollar apartments up for sale despite COVID-19

Despite the pandemic impacting the resort, hotel and rental market, the housing and apartment segment still has projects for sale at record prices.

The local logistics sector has emerged as the most attractive segment of foreign direct investment (FDI) during the seven months of the year, according to industry insiders.