At 9 am, an ambulance left Field Hospital No 1 in Hai Duong province, carrying a group of students to a site in Chi Linh City where they needed to take samples for tests for SARS-nCov-2. 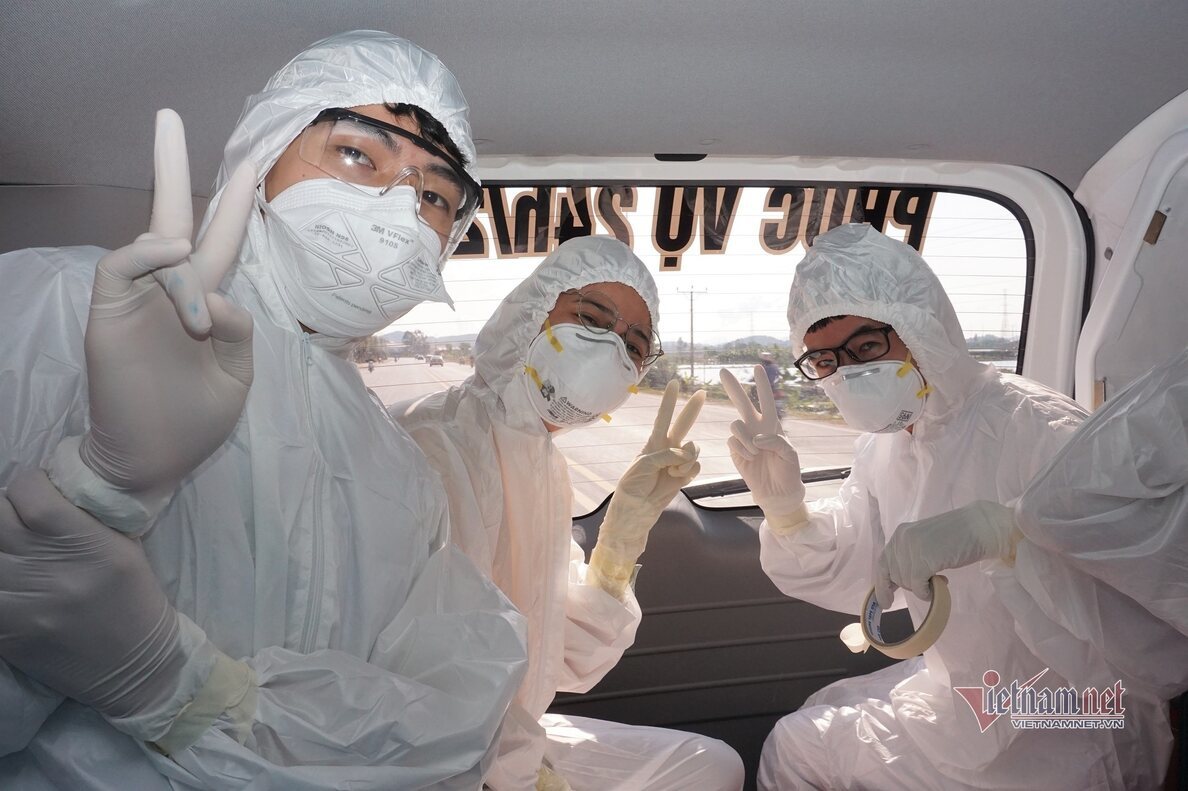 Linh and her teammates

The group had eight members, including two workers from the Chi Linh City Medical Center and six students from the Hai Duong Medical Technical University.

Dieu Linh and her friends in the group were all born in 2001. They are second-year students majoring in medical testing.

Inside the cramped ambulance, which was riding on a rough road, the students took advantage of time to repeat their professional knowledge and help each other wear protective clothing correctly.

“It is necessary to press adhesive tape tightly on all holes to prevent virus intrusion,” Linh said.

Fifteen minutes later, the ambulance stopped at a factory in Chi Linh City. Linh and her teammates had to take 360 medical samples for testing.

There were many people lining up to have their samples taken. The students re-arranged materials, divided into two groups, and set to work under the instruction of officers from the Chi Linh Medical Center.

Linh and her teammates attended a training course on January 28, when Covid-19 broke out in Hai Duong. They belonged to a backup group, as third- and fourth-year students were mobilized first.

After the training course, some of them took a bus to home villages to spend Tet holiday with their families. But just one day later, they were informed that second-year students were also needed to help because the number of infection cases had increased very rapidly.

At the time of receiving the news, Huy Hoang, a member of the group, had just returned home in the central province of Nghe An for nearly two hours and his luggage had not been unpacked. After talking to his parents, he immediately caught a coach to Hai Duong in the north.

As there was no direct coach to Hai Duong, he had to go to Hanoi first and then take a coach to Hai Duong. He arrived in the late evening of January 29 and together with friends, prepared for the work the next morning.

By the time the news came, Dieu Linh had finished packing for the return to the home village. She prepared a lot of gifts for family members but the plan to enjoy Tet holiday with family was cancelled.

“When I called my parents and said I had to stay in Hai Duong, my mother burst into crying. I am the only child in my family,” she said. “However, they later encouraged me and told me to make every effort to fulfill the task."

In Chi Linh City, students took samples, wrote down the labels, and arranged samples as required before they were sent to laboratories for testing.

Their working schedules are flexible, depending on the mobilization of the medical center. They have to check their mobile phone regularly and be ready to work at any time.

In general, the students have to turn up at the field hospital before leaving to take samples in the morning and finish their working shift in early afternoon. The second shift of the day begins in the afternoon and lasts until the evening. However, as the number of samples varies at different points, they sometimes have many shifts a day.

“I finish my work at 8-9 pm some days. Previously, we could leave at 5 pm and prepare for dinner. But now we just have enough time to have some cakes or instant noodles before going to bed,” Linh said.

Hoang said they need to be very careful and patient. If taking samples improperly, people may suffer from bleeding and the testing results would be inaccurate.

“It is difficult to take samples from children as they cry. Some adults are uncooperative. We have to encourage and persuade them to cooperate with us,” Hoang said.

At 1 pm, the students finish their work and return to the meeting place. Their box lunch contains chicken and bamboo shoot soup.

Linh said she bought half a chicken to prepare meals for Tet and materials to make spring rolls and other traditional dishes. “I just cannot make steamed glutinous rice,” she said.

This was the first time Linh celebrated Tet away from her family. “When I saw a girl carried by her mother to the market, I felt self-pity and I burst into tear. But we encourage each other to do our task,” Linh said. “Our parents are proud of us."