Drawing on their passion for technology and programming, two students from Vietnam National University have succeeded in creating a ‘Magic Spoon’ which can help people with tremors or Parkinson’s disease.

Dang Hai Ninh, 21, and Nguyen Duc Kien, 20, from the University of Engineering and Technology (UET), incorporated engineering, Internet of Things, data analysis and machine learning in their special utensil. 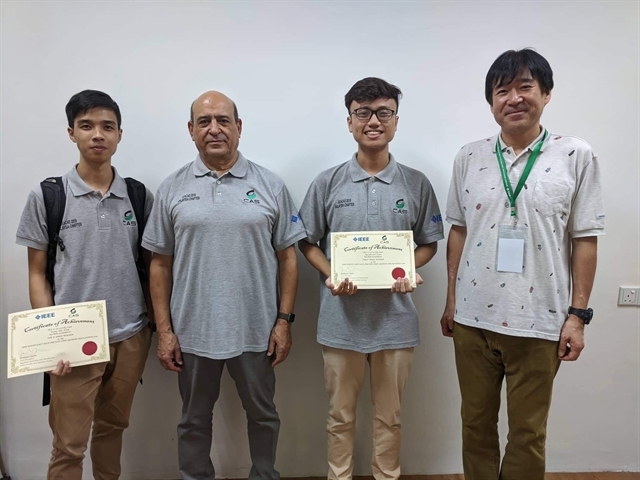 Dang Hai Ninh (first, left) and Nguyen Duc Kien, (second, right) from the University of Engineering and Technology under Vietnam National University won first prize at the Hackathon 2019, an annual science and technology competition for students from Southeast Asian countries

The invention helped them win first prize at the IEEE SEACAS Hackathon 2019 – an annual science and technology competition organised by the Institute of Electrical and Electronics Engineers - Circuits and Systems Society (IEEE CAS) for students, trainees and graduate students from Southeast Asian countries.

The competition was jointly held by the IEEE CAS and the Malaysian Research Institute on Ageing with the participation of groups of students from Malaysia, Philippines, Thailand, Singapore, Indonesia, and Vietnam in December last year.

"At first, we came to Malaysia with the idea of making equipment to monitor heart rate and check the health of the elderly,” Kien told Tuoi Tre (Youth) newspaper.

However, after a day of testing, the jury said the competition’s main topic was helping the elderly in daily activities, including bathing, personal hygiene and mobility.

The pair stayed up until 2am the next day. They even phoned tutors, seeking guidance.

Then Ninh suggested making a “magic spoon” so that people with tremors and Parkinson’s disease could pick up food and eat more easily.

“It’s hard for people with tremors and Parkinson's disease to feed themselves. With this special spoon they will be able to eat without support from others," Ninh said.

The theme of this year's competition was looking towards a smart society and the goal of sustainable development by 2030. Specifically, elderly citizens are a concern for researchers.

Participants were asked to study and develop products which help the elderly in daily activities.

They had three days to brainstorm ideas, develop and build their products. Then they presented their ideas and a product demo before an international jury board.

Kien said although he has a lot of experience speaking before the public, he was nervous as it took 15-20 minutes for the board to question other teams but only 10 minutes for him.

"At that time, I was very worried. The jury normally asked a lot of questions. However, when it was my turn, they didn’t ask any more questions. They just listened to my explanation. Then the head of the jury board – a French man – nodded and gave us the score,” he said.

According to Kien, the "Magic Spoon" identifies the tremors in older people based on multi-dimensional sensors.

Instead of conventional control techniques, they use artificial intelligence to aid its response to movements. Hand vibrations are recorded and kept in a database and displayed on mobile phones. As a result, doctors and family members can monitor and recommend appropriate measures.

The “Magic Spoon” was appreciated by IEEE CAS’s experts for its creativity.

Kien said the product was being finalised for a follow-up contest, adding that they have been invited to participate in the IEEE CAS student design competition held in Seville, Spain in May 2020.