Students may have to attend math, literature exams to finish high schools

VietNamNet Bridge – Vietnam plans to make big changes with its national education system after 2015. Students would have two exam subjects for the finals – math and literature – instead of six as currently.

VietNamNet Bridge – Vietnam plans to make big changes with its national education system after 2015. Students would have two exam subjects for the finals – math and literature – instead of six as currently. 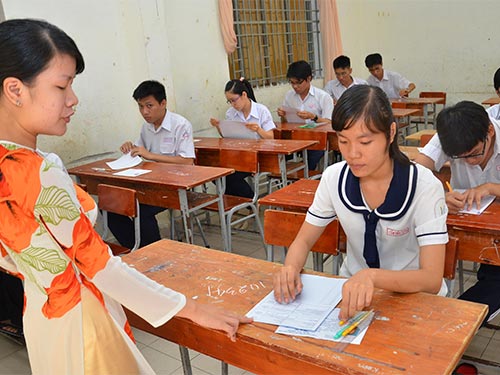 If the plan suggested by the Ministry of Education and Training (MOET) is implemented, this would make a breakthrough in the national education. Vietnamese students would have their workload eased, because they would have only two exam subjects for the finals.

Also under the plan, the national university entrance exam, the toughest and most costly exam, would be removed. Universities and junior colleges would enroll students after considering students’ learning records at high schools and the results of the finals. The schools can also request students to attend some exams or tests to learn more about their ability.

In another scenario, students would have to attend the math and literature exams.

The plan has been applauded by many of education experts. Associate Professor Van Nhu Cuong, Headmaster of the Luong The Vinh High School in Hanoi, believes the new method would allow to test students’ capability better than the currently applied finals. With the new method, local schools can take initiative in organizing finals in their conditions.

Dang Kim Vui, President of the Thai Nguyen University, said he advocates the new method which he calls a “breakthrough.” However, he said, the finals need to be more “reliable”, i.e. the finals need to reflect the real capability of students truly.

At present, the final exams, in the eyes of educators, do not have much significance, because nearly 100 percent of students pass the exam. Therefore, many of them have suggested removing the exam to save money.

Hien from MOET himself admitted that too many problems still exist in the general education, which makes the finals just the “formality.”

The president of a university noted that if the final exams cannot be improved, they cannot provide reliable information about students for universities to consider enrolling students.

“Teachers think they should give high marks to students to help them obtain high school degree with which they can look for jobs. As a result, nearly 100 percent of students pass the exams, including the weak students,” he said.

While some educators support the viewpoint that it’s necessary to ease the students’ workload and renovate the examination system, others keep cautious when asked about whether to cut down the number of exam subjects from six currently to two.

Nguyen Van Nha, former Head of the Training Division of the Hanoi National University, said high school finals is the exam which tests the students’ ability in many different fields. Meanwhile, math and literature exams alone would not be enough to do this.

President of the Phuong Dong University Bui Thien Du also said that the finals should not comprise of math and literature only, because these are the important exams in their lives.