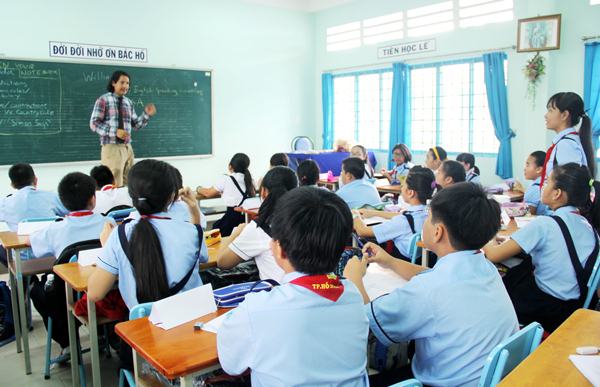 Thanh Nien reported that students have complained they don’t know which textbooks to use in learning English.

The HCM City Education and Training Department has released a series of ‘enigmatic documents’ and school leaders don’t understand what they have to do.

Meanwhile, parents have to spend big money on English school materials for their children.

However, this was not the final decision. A parent in district 4, whose daughter is a third grader, following the English intensive program, was astonished when she was told to buy another textbook – i-Learn Smart Star.

Some primary school headmasters said that the city’s education department released new instructions on textbooks for teaching English in March.

A headmaster said that after the department released Document No 719 on March 18 saying ‘the textbook can be used for teaching English at primary schools’ and organized a seminar on April 22, the school received a representative from the company that distributes i-Learn Smart Star. Therefore, the school decided to use the textbook.

However, in another document released on August 9, the department did not mention i-Learn Smart Star.

“The documents are not clear enough,” the headmaster explained. “We have told students to continue using i-Learn Smart Star, because we can’t ask students to buy so many different kinds of books."

Secondary school students also have the same problem. They have been told to stop using Solutions and use Access.

An official from a district’s education sub-department confirmed that in early August, the city education department told schools to use Access for secondary school instead of Solutions.

“Many parents have shown their opposition, saying that they were not informed about changes when the 2015-2016 academic year finished,” he said.

In HCM City, students learn English under many different programs. Tuoi Tre reported that the national program on teaching and learning foreign languages in the national educational system in 2008-2020 has not been favored by students and parents.

The newspaper quoted a parent of a third grader, who is also a teacher of English, as saying that learning in accordance with the national program won’t be effective.

“There are too many students in every class,” she explained.