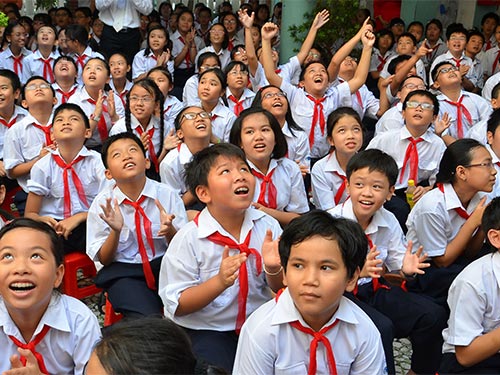 A parent from Hanoi complained on an online education forum that she was disappointed reading her son’s composition about his teacher. The boy is a fourth grader at a prestigious school in the city.

“My son’s teacher appeared in the essay as a beautiful young girl with long black hair, though I know for sure that the teacher has short blonde hair,” she said.

“The bigger problem is that the teacher on the essay written by my son’s friend, who lives next door, is exactly the same, with long black hair and charming smile,” she continued. “My son explained that all of his classmates write the same way as they were told by the teacher.”

A high school teacher in Hanoi noted that the story does not surprise him.

“This is a systematical error,” he commented. “Students are taught to tell lies in literature lessons.”

“Students nowadays tend to ‘manufacture’ essays in industrial way instead of creating their own compositions,” he continued. “Teachers give them prototypes, and students just need to copy the prototypes.”

The teacher went on to say that literature lessons at school are just like ‘writing practicing lessons’, during which students learn how to copy the sample essays given to them by teachers.

“I am afraid that we will produce a new generation of people who just repeat others’ words while do not have their own way of thinking,” he said. “They will be very boring people with no viewpoints of their own.”

Ngoc Han, 17, in Nha Trang City, admits that she finds her essays boring and that she does not want to read essays.

However, she said that students should not be blamed for similar essays.

“We learn to prepare for the exams. And if we do not write what we are told to write, we will get bad marks and fail the exam. We have to obtain high scores, though we have to tell lies,” she explained.

Bao Binh from Dong Nai related a story about how he learned literature in the seventh grade. “My teacher entered the class and asked what we thought what are the most valuable things in our lives. The answers varied: rice, health, money, happiness and freedom. But finally, all the 42 students wrote on their essays that labor was the most valuable as told to use by the teacher.”