Study pressure: how much is enough for VN students?

The image of mother and daughter embracing each other and crying in front of the examination compound that appeared in local newspapers was a haunting moment for parents.

The image has sparked debate among parents and education experts on whether to put pressure on children and how much pressure is enough. 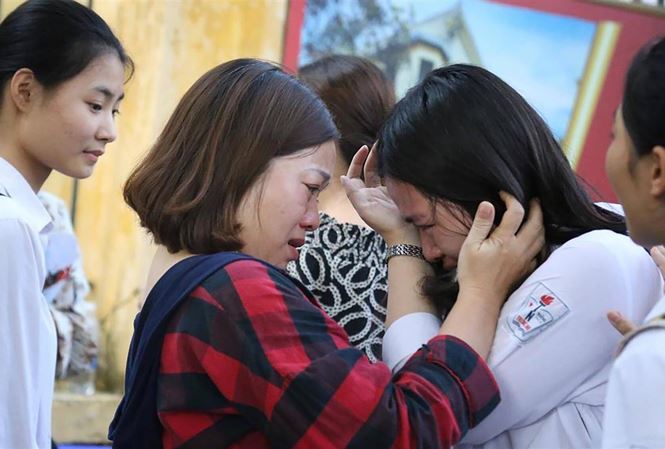 T. Tran, 42, wrote on his Facebook that he made a big mistake when he did not put pressure on his children and let them do as they wanted. As a result, his daughter usually played truant and failed the exam to enter university, while his son, an eighth grader, has ‘average’ learning capability.

“I learned a lesson that if you don’t put a strong enough pressure on your children, they will never be aware of the value of life. My mistake was that I did not keep them under strict discipline which made my children become wild and defiant,” he wrote.

His story got hundreds of likes and 250 comments. Many parents wrote that there was no need to feel sad about the daughter’s failure to enter university, because obtaining higher education must not be the only way for someone to make his way in the world.

The parents advised Tran to let children do what they want, which allows them to promote their creativity. In this case, following higher education is not what the girl wants.

Experts recently have warned about the increase in number of students committing suicide because of the pressure on their studies. They said parents now tend to put overly high hopes on their children and if the children cannot fulfill what their parents want, they kill themselves to escape the pressure.

Meanwhile, other parents asserted that though children’s willingness needs to be respected, they need to understand that they have certain duties they have to fulfill.

“If all people were allowed to ‘do what they want’, the word ‘education’ would not exist, and the society would become chaotic,” a parent argued.

A.P Nguyen, a young man, said when he has children, he will keep them under strict discipline.

“I agree with T. Tran and understand the author's regret for applying a wrong educational method for his children,” he said.

“When I was a teenager I was frustrated by the pressure and discipline from my parents, but now I'm grateful to them for doing this. Modern society needs people with deep knowledge and high skills, and there is no room for lazy people,” he commented.

Those who remain neutral think that it’s necessary to put pressure on children, but the pressure must be ‘reasonable’. However, what ‘reasonable pressure’ means remains controversial.

The 14th National Assembly (NA) on Tuesday weighed in on the amended draft Law on Education during its seventh session. Textbooks and national exam were the topic of a heated debate.