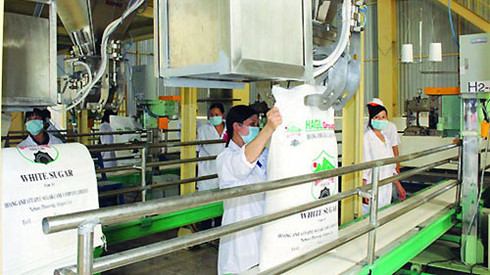 The Ministry of Industry and Trade (MOIT), said Nguyen Hai, general secretary of the Association, has employed a tariff rate quota (TRQ) import system as a tool to regulate both the volume of imports and domestic prices.

The TRQ system has allowed other countries such as Thailand to export specified quantities of sugar to Vietnam without having to pay any import tariff, but subjected all imports of sugar above the pre-determined threshold to a higher tariff.

The threshold levels of imports have been determined by the MOIT in line with the country’s World Trade Organization open market commitments and with overall domestic demand.

This increased TRQ of 100,000 metric tons was the subject of much discussion and debate at the conference.

Bui ThiQuy, general director of the Con Long My Phat Sugar and Sugarcane Joint Stock Company voiced his objection to the increased TRQ on the basis that he believed domestic inventories were adequate to cover the additional 100,000 metric tons.

MrQuy said sugar stock inventories nationwide had been estimated at roughly 400,000 metric tons, which he believed were more than adequate to satisfy the need without having any negative downward impact on the market price of sugar.

Allowing more Thai sugar into the Vietnam market would put downward pressure on the market price, because as a rule, it sells for much less than home grown sugar.

Pham QuangVinh, deputy general director of the Can Tho Sugar and Sugarcane Company in turn agreed that the TRQ should not have been raised by an additional 100,000 metric tons.

An additional factor that the Ministry had failed to take into account in its analysis to lift the TRQ was the amount of sugar that had been illegally imported through border gates from Thailand.

The Vietnam Sugar and Sugarcane Association has estimated that annually on average about 200,000 metric tons of sugar illegally finds its way across the border from Thailand into Vietnam.

MrVinh said that if the 400,000 of domestic inventories and the black market sugar of 200,000 metric tons crossing the border were to have been factored in properly, there would be no need for the increased TRQ.

As a result, the increased TRQ imports would drive down the market price of sugar, creating huge financial losses to sugarcane growers, processing companies and others in the sugar segment of the economy.

Vu ThiHuyenDuc, CEO of the Sugarcane and Sugar Corporation No 1, also voiced strong objections to the increased TRQ of 100,000 metric tons and agreed with others that the need wasn’t properly assessed by the Ministry.

Deputy Minister Tran Thanh Nam of the Ministry of Agriculture and Rural Development (MARD) pointed out, in defence of the decision to increase the TRQ, that it was made as part of an effort to counter ongoing price manipulators in the market.

MARD in collaboration with the MOIT had conducted an extensive investigation and concluded that a number of sugar millers were intentionally hoarding and concealing sugar inventories in an attempt to artificially drive up the sales price.

The Vietnam government, he said, has an obligation to protect the best interest of consumers and keep market prices of sugar stabilized where they ought to be and not allow profiteering.

The increase of the TRQ by 100,000 metric tons will keep market prices stable where they should be in the absence of unfair trading practices and not allow sugar millers to pocket millions through fake inventory shortages and price manipulation.