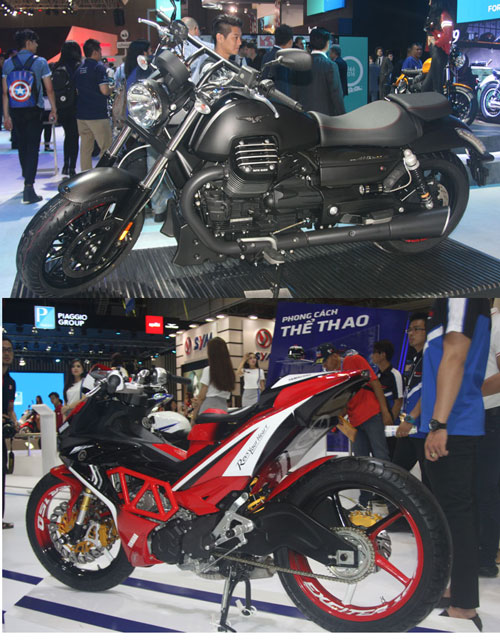 A high-cylinder capacity motorbike demonstration has just taken place in HCM City, showing the high interest by the world’s leading motorbike manufacturers in the Vietnamese market.

While Honda has the CBR1000RR, Yamaha has YZR-M1 and XSR900, Kawasaki the Ninja ZX-10R and Suzuki the GSX-R1000 2016. A series of high-cylinder capacity models made by the four Japanese companies also show their strength.

From Europe, Ducati brought a series of powerful models, including Scrambler, Multistrada, Diavel and Scrambler Sixty2.


Meanwhile, Benelli introduced 15 models with the cylinder capacity of between 150 cc and 1,130 cc.

Some days ago, two long lasting brands from the US – Indian and Victory – offered their latest models with different versions.

Analysts commented that the presence of powerful models from the world’s most famous manufacturers has heated up the Vietnamese super-motorbike market.

Five years ago, the image of a high-cylinder capacity motorcycle on the street was rarely seen.
The super-motorcycles run fast on streets, which produce big noise and bikers in sportswear and helmets are becoming familiar.

Analysts commented that the super-motorcycle market has become hot since the Ministry of Transport in March 2014 removed the limitation on the subjects eligible for applying for A2 vehicle driving license.

An official report showed that 25,000 high-cylinder capacity motorcycles have been registered so far, including 14,000 in HCM City and 1,000 in Hanoi.

The figure is modest if compared with the total number of motorbikes registered so far, but shows the rapid increase in the number of users, which can show that Vietnamese are willing to spend money on expensive and original motorcycle products.

A motorbike dealer said Harley-Davidson models, priced at VND336 million-2 billion, have been selling well. An imported container of 8-12 Harley-Davidsons can be sold within five days.

Nowadays, the expensive motorcycles such as Honda Goldwing, priced at over VND1 million, would not surprise Vietnamese any longer, though it is even more expensive than a car.

Super-motorcycles not only appear in large cities and urban areas, but also in other localities such as Nghe An and Ha Tinh provinces.