VietNamNet Bridge – A teacher of a high school in the southern province of Hau Giang seized 14 pairs of sandals from students and cut the other 5 pairs because the students violated the regulations saying that they have to go to school in uniform.

VietNamNet Bridge – A teacher of a high school in the southern province of Hau Giang seized 14 pairs of sandals from students and cut the other 5 pairs because the students violated the regulations saying that they have to go to school in uniform. 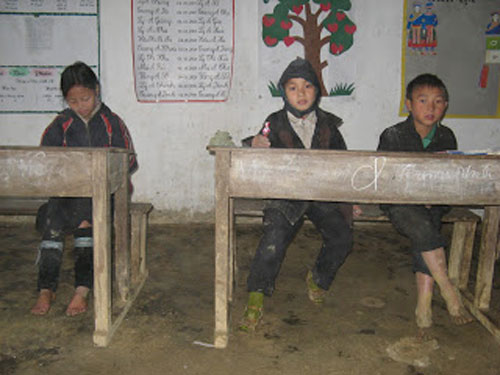 A lot of students have to go to school in bare feet.

The behavior of the teacher, named Thuong of the Vi Thuy High School in Hau Giang has raised the anger among the public.

On education forums, people expressed their worries that the insensitivity has been tolerated in the schooling environment. The behavior was conducted by a teacher who bears the duty of teaching students how to become useful citizens to the society.

Ngo Thi Quynh Nhu, a student from 10A9 class, said that her pair of sandals were bought at VND135,000, which her mother got after two days of working hard. Nhu had to wait two months to get the pair of sandals, and she could wear them only two days before they were cut.

After the sandals were cut, Nhu had to travel a 2 kilometer distance to reach home in bare feet.

Le Phu Cuong, a student from the same class, was in worse conditions. Cuong and his family members now live on the land plots they borrow from relatives. Therefore, it is nearly impossible for Cuong to get a new pair of sandals.

According to Nhu and Cuong, there are 40 students in 10A9 class, while 50 percent of them had sandals cut. And they could not understand why they were punished.

Earlier this week, they were told to wear white shoes to school from August 26. Meanwhile, teacher Thuong punished them and cut the sandals on August 21, or 5 days in advance.

Luong Phong Nha, Headmaster of the Vi Thuy High School, had to offer an apology to the students and their parents and ordered to fix the problems immediately.

The school’s representatives and teacher Thuong came to meet every of the students and their families, giving each of them VND200,000 in compensation for the cut sandals.

“I greatly sympathize with the students after hearing that some of them having tears welling up, seeing the teacher cutting the pair of sandals that their parents bought with the sums of money they earned from two days of working,” Nha said.

Le Hoang Tuoi, Director of the Hau Giang provincial Education and Training Department, has also expressed his dissatisfaction about the teacher’s behavior.

Tuoi said the teacher, who tried to force students to wear uniforms when going to school, behaved incorrectly towards the students.

“The teacher and the school should have tried to persuade students to buy uniforms or give financial support,” he commented.

The behavior of the Vi Thuy High School’s teacher has been described by Tuoi as an “extremist” and “unacceptable” action.

“Everyone wishes to go to school in beautiful clothes and shoes, and every school wants its students wear beautiful uniforms. However, they need to understand that they must not hurt the poor students,” Tuoi said.

He went on to say that such an action cannot be accepted. While teachers strive to build up friendly schools and active students, their behaviors have come contrary to the principle.