The EU-Vietnam FTA was signed in Hanoi on June 30 after nine years of negotiation. The EU has committed to remove 85 percent of tariff lines on Vietnam’s exports soon after the agreement takes effect, while the number of tariff lines to be removed after seven years of the FTA implementation will be 99 percent. 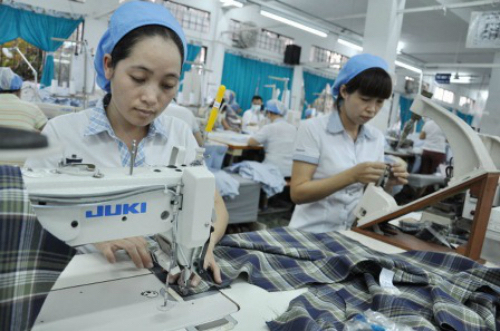 The EU is the second largest textile and garment market for Vietnam with annual growth rate of 7-10 percent, just after the US. In 2018, Vietnam exported $4 billion worth of textiles and garments to the EU.

According to deputy chair of the Vietnam Textile & Apparel Association (Vitas), Truong Van Cam, the current tariff on Vietnam’s textiles and garments is 9.6 percent. But when EVFTA takes effect, the tariff will be gradually cut to zero percent within seven years. Vietnam has reasons to hope that the textile and garment export turnover may hit$40 billion with EVFTA.

In its latest report, Rong Viet Securities predicted that large garment companies such as Sai Gon Garment, TNG, May 10 and Viet Tien will see considerable growth in number of orders when EVFTA takes effect.

Than Duc Viet, deputy general director of May 10, said the company has drawn up plans to join domestic supply chains for yarn-forward production plans, to exploit the advantages to be brought by the agreement.

Currently, 35 percent of May 10’s products goes to the EU, 45 percent to the US and 10 percent to Japan. However, when EVFTA takes effect, exports to the EU will increase significantly.

In the last two decades, the two-way trade turnover between Vietnam and the EU increased by 20 times, with export value of 50 billion euros each year.

Pham Hong Hai, CEO of HSBC Vietnam, estimates that EVFTA will help Vietnam’s GDP increase by 0.1 percent each year thanks to the pure commercial impact.

The director of a garment company in Hung Yen province predicted that his company’s export volume to the EU would increase by 20 percent because ‘there will be many new clients and loyal clients will place bigger orders’.

The director believes that the number of orders will be higher because ‘in textile and garment, EVFTA doesn’t set as many barriers as the CPTPP’.

However, Nguyen Thi Thu Trang, director of WTO Center, warned that in order to be eligible for the preferential tariff, Vietnamese enterprises will have to satisfy requirements on origin, and inner-bloc content in products must not be lower than 40 percent.