The making of a coastal destination

The Mui Ne Tourism Site in the south-central province of Binh Thuan recently secured recognition from the Ministry of Culture, Sports and Tourism as a national tourism site, marking a new era of growth for the destination.

Binh Thuan as a whole has already been a highlight on Việt Nam’s tourism map for 25 years, boasting splendid ocean-front resorts that are popular both inside and outside of the country. 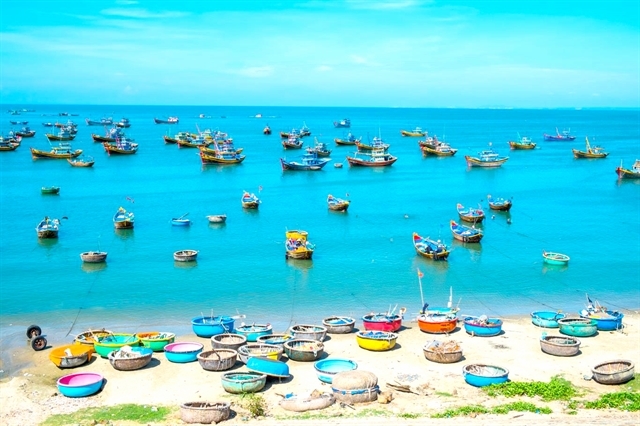 A total solar eclipse on October 24, 1995, drew thousands of people from all over the country to the coastal beauty of Mui Ne, in the province’s Phan Thiết City, to witness the natural interesting phenomenon.

Among the many visitors were businesspeople who saw an opportunity to develop the coastal strip into something special.

The province boasts a location favourable for exchanges and links with other provinces on the coast as well as those in the Central Highlands, the southern region, and the Mekong Delta, such as Nha Trang, Da Lat, HCM City, and Ba Ria-Vung Tau.

It is home to Phu Quy Island, which has been dubbed a “pearl of the sea” and is located 56 nautical miles (100km) offshore.

It has three national-level historical sites and eight provincial-level sites.

Mui Ne, meanwhile, has a warm climate year-round and is known for its sea breezes, which attract people from around the world keen on windsurfing, sailing and other water sports.

It hosts an annual sailing event and has been judged among the 50 best beaches in the world and No 1 in Asia for sailing.

Ngo Minh Chinh, former director of the Binh Thuan Department of Culture, Sports and Tourism, said that over the last 25 years the province had posted significant success after starting out with virtually nothing.

“We have seen tourism develop in both size and depth,” he said. “Everything is based on a straightforward investment environment, which attracts businesses and investors in different economic sectors.”

“With its abundant natural resources and favourable location, the province is capable of offering sea tourism products not found elsewhere.”

According to the tourism authority, the province had 383 projects in tourism services as of October, with capital totalling VND59,618 billion (US$2.6 billion). Twenty-four are foreign-invested projects.

It is now home to 562 resorts, hotels, and other accommodation with over 16,500 rooms in total, together with 557 apartments and 315 villas for rent.

The sector now employs 25,000 workers, of whom 70 per cent have received training in tourism skills.

The province welcomed 6.4 million visitors, including 775,000 foreigners, last year; 100-fold higher than in 1995. Revenue reached VND15,110 billion ($652 million), which has been growing impressively each and every year.

“Tourism has made a substantial contribution to local economic development,” he said. “Revenue from tourism this year is expected to account for 10 per cent of our gross regional domestic product.

“The sector brings stable incomes to thousands of people, especially those from rural and coastal areas. Tourism has also played a major role in preserving and developing historical and cultural sites as well as natural resources.”

Mui Ne to be a top destination in Asia-Pacific

Economists recognise that no other place in Việt Nam has seen such a strong pace of tourism investment as Phan Thiet City.

Traffic infrastructure to and from Binh Thuan is constantly undergoing upgrades, giving the local tourism sector yet another advantage.

National Highway 1A has been widened; the Dau Giay - Phan Thiet and Phan Thiet – Vinh Hao highways have seen construction begin and will be completed shortly; and roads linking tourism destinations within the province are being built or in the pipeline, and will be an important lever for local tourism development in the years to come.

Authorities have decided to focus on completing technical and material infrastructure for tourism and attracting even more investors and visitors.

The province is doing what it can to turn Mui Ne into a leading tourism magnet in the Asia-Pacific region by 2030.

It hopes to welcome some 9 million visitors by 2025, with 1.5 million being foreigners.

Chairman Hai said that in addition to developing different types of tourism, enhancing the quality of tourism products, and promoting its image as a safe and friendly destination, co-operation with other provinces would be an important factor in success.

“We will continue to be part of the tourism triangle of Binh Thuan, HCM City, and Lam Dong, with the Saigon, Da Lạt, and Mui Ne flower markets,” he said.

“We will further cooperate with major tourism centres like Hà Nội, HCM City, and Can Tho to offer more package tours to Binh Thuan and attract domestic visitors.”

The province, he said, was calling for strategic investors with economic power and experience in sea tourism, to build large luxury complexes.

“In the future, this will be a place for luxury relaxation and water sports, providing an array of services to guests who can pay more and stay longer,” he said.