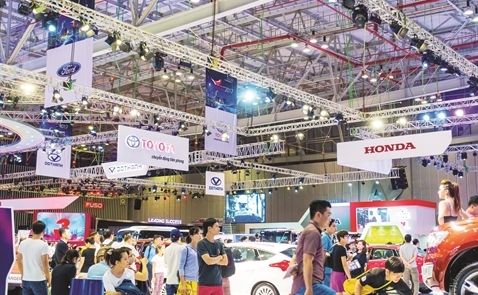 2018 began with the shocking news that two Japanese manufacturers – Toyota and Honda – decided to suspend exports of Lexus, Fortuner, Yaris, CR-V and Hilux models to Vietnam. Meanwhile, other rivals continue boosting investment and expanding the distribution market. No imported car went through ports in HCMC in January.

The decision by the two Japanese auto manufacturers, according to analysts, could be seen as a move to show their attitude towards Vietnam’s new policy on the imported car business – Circular 03/2018 and Decree 116/2017.

The new policy sets stricter requirements on import procedures, aiming to ensure the quality and safety for users and environmental protection.

However, many countries do not provide a copied certificate of eligible imported automobile classes, while others don’t issue VTAs, such as South Korea

Another new requirement is that all automobile assembling factories in Vietnam have to build roads for CKD-assembled car testing with the minimum length of 800 meters.

The new regulation, scheduled to take effect from 2019, has worried automobile assembling enterprises, both Vietnamese and foreign invested.

Massmann said the requirement would put a heavy financial burden on enterprises because most of them do not have such road systems or large land funds to develop the systems.

In 2018, the Ministry of Industry and Trade affirmed that measures would be taken to control car imports and support domestic production.

Thaco, for example, is building a road for car testing to satisfy the requirement of the new decree. It has signed a contract to become the exclusive distributor of BMW, and it plans to export its buses to ASEAN.

Vinfast plans to launch its first car model on the market by the year end.

Meanwhile, unlike Toyota and Honda, Mitsubishi has decided to assemble the Crossover Mitsubishi Outlander in Vietnam.

Domestically made cars to be cheaper thanks to tax incentive