The odd habit of Vietnamese billionaires: shopping with bags of money

VietNamNet Bridge – While the rest of the world predominantly spends plastic money, Vietnamese still prefer cash. To buy valuable things, they have to pay with many bags of banknotes.

VietNamNet Bridge – While the rest of the world predominantly spends plastic money, Vietnamese still prefer cash. To buy valuable things, they have to pay with many bags of banknotes. 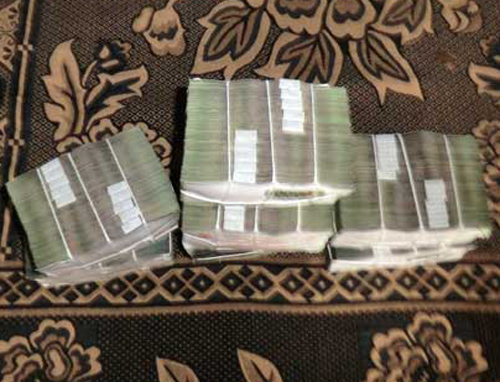 Nguyen Van Ngo, a farmer in Hanoi, has sold a sanh (Ficus benjamina L) tree to an anonymous billionaire from Thanh Hoa Province for VND4 billion.

The buyer saw the tree at a trade fair and he immediately was attracted by its style as well as its old age which, in the Oriental philosophy, symbolize everlasting life and prosperity. He came to the decision to buy the tree two days later.

The deal has caught the special attention from the public for two reasons. First, the ornamental tree market has been very gloomy over the last three years with very few successful transactions reported. Therefore, people bow in admiration to the billionaire who spends such a huge sum of money, worth a fortune, to buy the 100-year-old tree.

Second, the payment for the tree was made entirely in cash. Bundles of banknotes were carried to Ngo’s house in bags to pay for the goods.

Trang A Tang, dubbed as “Tang Keangnam”, was a familiar name to the northern people for his richness.

The drug baron was arrested in 2013 when carrying 256 cakes of heroin in two Toyota cars.

The nick name “Tang Keangnam” originated from his purchase of a high-end apartment at Keangnam Landmark Tower in Hanoi. Shortly after hearing about the sale of the apartments, Tang came to Hanoi to register to buy several apartments at once.

Tang, who was in untidy clothes and could not speak Vietnamese fluently (he is an ethnic minority man), was not really welcomed.

However, the tower’s managers soon changed their tune when they saw Tang take two big bags of banknotes from his luxury car. He plopped the bags on the table and said this was money for the apartments.

In late October 2011, people in HCM City rushed to buy gold when the prices unexpected slumped.

Two men, named Tran Hung L and Nguyen K, reportedly carried a bag with VND7 billion inside on motorbike from their houses in district 5 to the gold shop in district 1 to pay for the gold they bought.

Another man, Nguyen Van H, in district 12, also came to the same shop with a big bag of money. H said the sum of money was big enough to buy more than 200 taels of gold. When asked if he felt at risk when carrying big cash with himself, H said this is what he usually does.

Tens of cashiers of the shop, a branch of the goldsmith gold company on Nguyen Cong Tru, were used to count the bank notes. The neighboring banks were also asked for help.

About 70 policemen in Son Tay District in Quang Ngai Province in December 2013 were assigned to escort tens of people to their homes.

The people came to the district people’s committee office to receive financial compensation for the homes they had to leave to make room for the Dakdrink hydropower plant. Each received VND200 million – 2 billion.