Thousands of liters of oil spilled on Quy Nhon beach

VietNamNet Bridge – On the morning of July 7, many fishermen found concentrated oil on aquaculture cages in Hai Cang Ward, Quy Nhon City of Binh Dinh Province, which killed a lot of shrimp and fish.

VietNamNet Bridge – On the morning of July 7, many fishermen found concentrated oil on aquaculture cages in Hai Cang Ward, Quy Nhon City of Binh Dinh Province, which killed a lot of shrimp and fish. 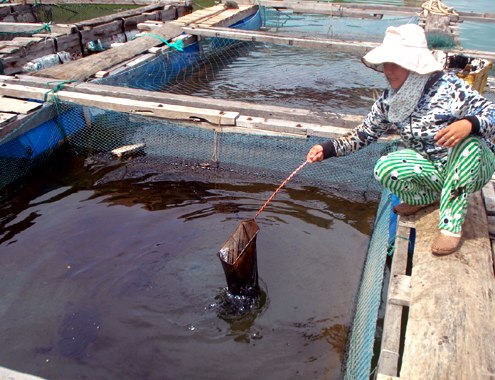 An oil spill spread thickly on about four hectares in Hai Cang Ward. Many fishing boats anchored along the coast were also stuck with oil. Big streaks of oil repeatedly drifted ashore. It is estimated to have thousands of liters of oil on the beach.

Fisherman Huynh Duc, 55, said when he and his wife visited the cages, they saw a thick layer of oil on the surface and dead fish floating on the water.

The same day, the authorities could not identify the source of the oil spill. Fishermen could only use manual methods to salvage oil on the water to limit damage to the aquaculture cages.