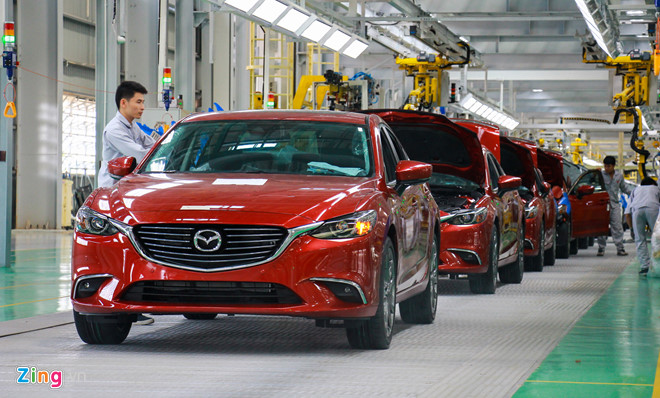 On July 10, Hyundai Thanh Cong for the first time released a report on monthly sales. The manufacturer sold 24,557 products in the first half of 2018.

Toyota sold 25,829 products of both Toyota and Lexus brands, while Truong Hai sold 32,308 cars of Mazda, Kia and Peugeot brands.

With a strategy on focusing on assembling cars, Hyundai Thanh Cong and Truong Hai are not meeting difficulties in supplies. Hyundai earlier this year stopped four import models to gather strength on assembling cars domestically.

Meanwhile, Truong Hai now imports only a few models which are not major sources of income.

If reckoning up the number of cars with fewer than nine seats sold by Hyundai Thanh Cong and VAMA’s (the Vietnam Automobile Manufacturers' Association) members, the figure would be 108,360 cars in the first half of the year.

In sedan-A segment, Hyundai Grand i10 was the best seller with 12,781 cars sold. It, together with Kia Morning (5,570 cars) left the two rivals – Chevrolet Spark and Suzuki Celerio – far behind.

Toyota is still outside the market segment, but the situation will change if the rumor about the appearance of Wigo is true.

The No 1 position in sedan-B market segment belongs to Toyota Vios with 12,650 cars sold, while sedan-C was Kia Cerato and Mazda 3. Meanwhile, Toyota is the No 1 in sedan-D segment.

Meanwhile, Kia Sedona stayed firmly in the No 1 position in the large-size MPV market, though only 869 products were sold.

Ford is not a member of the top 3, but it dominates the pick-up market with Ranger. Despite the difficulties in supplies, the number of 2,874 cars sold was high enough to outstrip all the other rivals.

EcoSport dominates the small-size crossover thanks to the good selling price and the absence of rivals.

The common characteristic of all the best sellers in different market segments is that they are assembled domestically.

The amount of imports in the market was modest as not many importers could satisfy the requirements stipulated in Decree 116.