As many as 229 outstanding students in the central province of Thua Thien-Hue received Vallet scholarships during a ceremony on October 29. 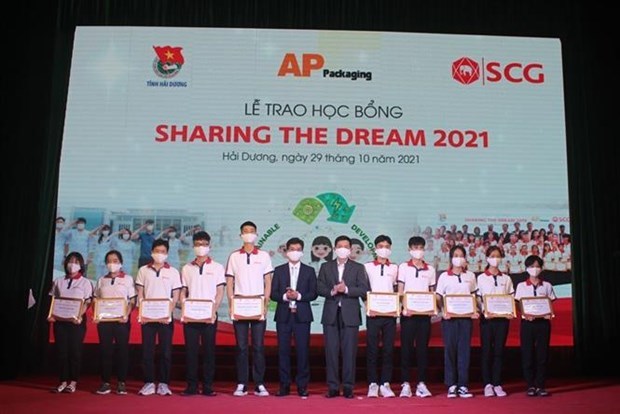 Since 2007, Sharing The Dream scholarships have been presented to over 5,000 students in localities nationwide, including 100 from Hai Duong (Photo: VNA)

The Vallet Scholarship Fund was established in 2001 by Professor Odon Vallet from France’s Sorbonne University, through the Meeting Vietnam organisation. It has been the largest non-governmental scholarship fund in Vietnam over the past two decades.

The professor uses the annual interest from his inheritance to fund scholarships for students posting outstanding academic results in France, Benin, and Vietnam.

Meanwhile, 50 poor students with good academic performances in the northern province of Hai Duong also received the “Sharing The Dream” scholarships, which is funded by Thailand’s SCG Group.

The total value of the scholarships is 260 million VND (11,340 USD). Each university student received 6 million VND, while school students got 4 million VND each.

Since 2007, Sharing The Dream scholarships have been presented to over 5,000 students in localities nationwide, including 100 from Hai Duong.