As is the case with many other seafoods, “tom”( prawn) is a nutritional food and very good for our health. 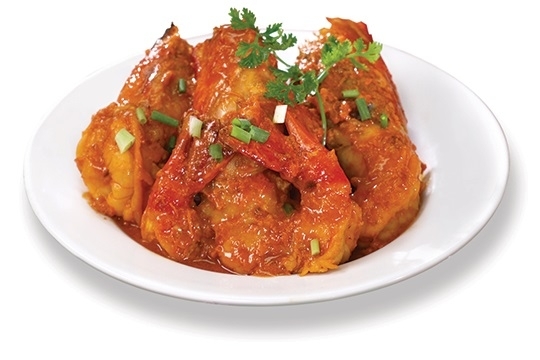 “Tom kho” also has various kinds of processes and each one has its own special flavour, but one of the most delicious dishes is “Tom kho to”. Similar to “Ca kho”, to make “tom kho” we also have two stages: preparation and cooking.

We choose big shrimp to make this dish. The shrimp should be fresh. We wash each shrimp carefully and then remove its shell, using knife to cut a shallow line along its body to clear all the dirty things, pull the head back into its body until it reaches the tail to create circle shape and remove “gach tom” from its body.

After finishing this step, we mix “gach tom” with some drops of lemon juice, a little pepper, sugar, “nuoc mam” and oil, then we simmer this liquid until it reduces. Next, the shrimp are dipped into the reduction. And the dish is finished. It is very tasty to eat with steamed rice.

Besides “ Tom kho to”, there are many types of “ tom kho” like “ tom kho la chanh” “ tom kho nam” , with these dishes we only need some extra ingredients but the method of cooking are based on the same rule like “ tom kho to” and all of them are so scrumptious.