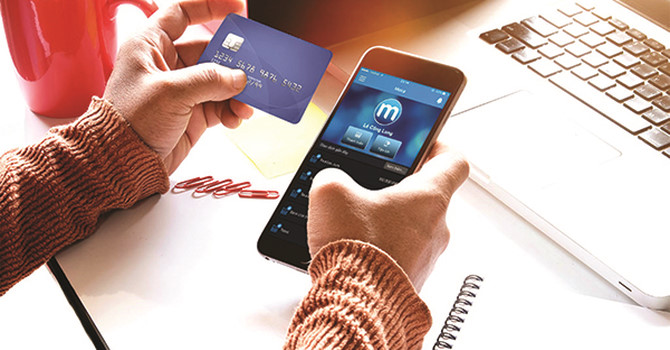 Samsung recently introduced Samsung Pay payment method with smart Gear S3. A smart watch can be waved in front of a POS to make payments for cinema tickets, coffee and goods. In a presentation, Shinhan Bank’s ATM cardholders withdrew cash with Samsung Pay at ATMs without cards.

Vietnam is striving to reduce the non-cash payment proportion to less than 10 percent by 2020. The non-cash economy is nearing Vietnam thanks to many factors, including the bustling e-commerce and retail market, and the explosive number of internet and mobile users.

A report of Appota showed that Vietnam now has 50 million smartphone subscribers and 53 percent of population using internet, which both helped Vietnam’s e-commerce grow by 40-50 percent in 2017, far exceeding Google’s predictions.

According to the Vietnam E-commerce Index report, e-commerce grew by 25 percent in 2017. The the high growth rate can be maintained in 2018-2020, while the e-commerce revenue is expected to increase even more sharply thanks to the technology boom and new shopping habits.

To date, 25 non-bank institutions have been providing intermediary payment services. In 2016, the total value of the transactions via e-wallets in Vietnam reached VND53.109 trillion, which was even higher than the value of payments via domestic cards with POS and equal to one-third of payment value with international cards in the same year.

Many foreign payment platforms have been developing in Vietnam, including Samsung Pay, Facebook, LG, Google and Alibaba.

However, except for apps launched by banks, to date, no payment platform goes beyond its network. There are many payment solutions such as non-touch technology-based app, QR code and e-wallet.

Penny Gillespie from Gartner commented that normal payment methods will be replaced, sooner or later, in the digital era.

However, e-payments are still not common in many places in the world, especially in countries where cash payments are prevailing and people like depositing their money at banks. The e-wallet market remains fledgling with consumers’ low interest and low number of shops which accept this payment method.

Cybersecurity is the biggest concern for mobile payments. The presence of many e-payment companies in Vietnam in the context of the lack of management by state agencies has led to many different payment systems. As a result, consumers have to use many payment methods.