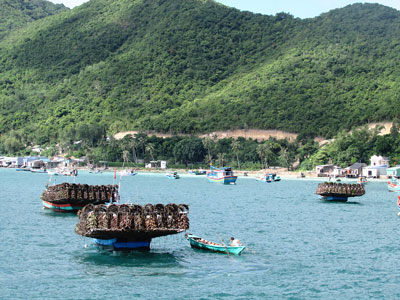 The Vietnam Border Guard High Command announced cooperation with the Ministry of Culture, Sport and Tourism to design tours to border areas in the sea.

The program, announced in Hanoi on March 24, is part of 2014-2020 cooperation between the two units.

The Vietnam Border Guard High Command and the Ministry of Culture, Sport and Tourism will organize activities, art performances and sporting events in border stations and remote areas on islands.

These will include libraries and cultural exchanges with neighboring countries to strengthen relationships among nations.

The two units will offer more tours to sea-border areas and create advantages for international travelers to Vietnam via border gates.

The program aims to raise the public awareness of Vietnam's sovereignty over sea and islands.

Hue Monuments Conservation Center announced that Vietnamese tourists and residents will receive free admission to Hue relics from 7 a.m to 5 p.m on March 26.

The promotion marks the 39th anniversary of the liberation of Thua Thien-Hue Province. The center is working with Nguyen Hue High School to organize a program highlighting cultural heritages for local and international students.

More than 80 local and foreign students from Singapore and Thailand participated in a visit of Hue Imperial Citadel and enjoyed Nha Nhac (Royal Court Music) at Duyet Thi Duong Theater.

Extra fees will be charged for visitors at Dong Loc T-Junction site in Ha Tinh Province starting March 21, according to site management board.

Fees for a guide, flower offerings, documentary screenings and other cost VND 10,000 per person. Parking fees range from VND 2,000 to VND 25,000 depending on the vehicle.

People recognized for revolutionary service, heroic mothers, veterans, people with disabilities, children under 15 years old, and citizens awarded with Hero of the People’s Armed Forces and Hero of Labor awards will receive free admission and a discount on entrance fees.

The site welcomed more than 300,000 visitors in 2013. It played a vital role in transportation of necessary ammunition from north to south during the war. It is famous for the story of 10 female martyrs who sacrificed their lives to ensure transportation of important materials on the Ho Chi Minh Trail on July 24, 1968.

From 1965-1968, the US army dropped nearly 50,000 bombs and fired tens of thousands of missiles on the T-Junction in the hopes of cutting off the transport route to the southern front.

These are the airline’s first international routes.

Japan is promoting tourism in Vietnam, particularly in Ho Chi Minh and Hanoi, in a bid to attract more tourists to the ancient Japanese capital of Nara.

Nara prefecture statistics show the number of Vietnamese tourists traveling to the ancient capital has to date remained modest, but it is likely to increase considerably following the recovery of the Vietnamese economy.

With an initial marketing budget for tourism of JPY1.5 million, the prefecture will introduce Vietnamese organisations and travel agents to its tourism potential, aiming to attract more than 500,000 foreign visitors in 2014.

“I have heard that Vietnamese people are interested in traveling to Japan. We want to encourage them to pass other cities to visit the charming ancient capital of Nara instead”, said a Japanese official.

The number of Vietnamese tourists to Japan reached 7,400 in February, representing a year-on-year rise of 70 percent.

According to the latest report of the Japan National Tourism Organisation, the increase was the third highest, following Thailand (72.4 percent) and China (71.1 percent).

The surge in numbers is attributable to the Japanese Government’s relaxation of visa requirements for visitors from several Southeast Asian countries, including Vietnam and Thailand.

The report said that 880,000 foreigners visited Japan last month, up 20 percent from February.

In the latest statistics from Nara prefecture’s tourism authority, the locality has enjoyed a rapid increase in Vietnamese visitors.

The low-cost airlines Jetstar Pacific has announced that it will introduce international flights from Vietnam to Macau (China), with one departing from Hanoi and two others from the central city of Da Nang every day from March 28.

Accordingly, Da Nang-Macau flights will depart from Da Nang International Airport at 11:05 and 16:30 and return at 9:00 and 14:25 (Macau time) from International Macau Airport.

Meanwhile, the daily Hanoi-Macau flight will take off from Noi Bai International Airport at 22:00 and return at 19:55 from Macau the following day.

Tickets for the flights are already available at Jetstar Pacific offices.