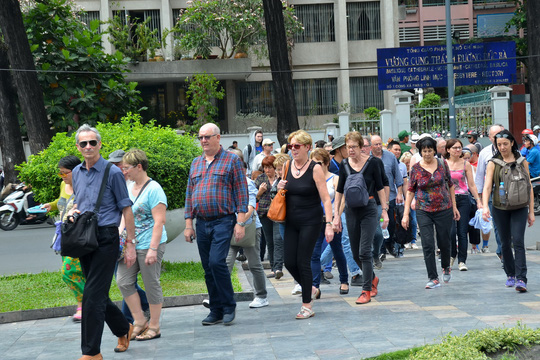 Most recently, the Quang Binh provincial authorities released a clip abroad to promote tourism with the introduction from director Jordan Vogt-Roberts. A plan on designing a tour related to the film has also been drawn up. Not only Quang Binh, but other localities can also grab the opportunity to attract travelers.

Saigontourist has received 2,200 cruise travelers who came to Nha Trang City on Celebrity Constellation. They were from the UK, US and Canada. The total number of cruise travelers served by the firm in the first two months of the year increased to 50,000.

Travel firms, hoping to compete with regional countries in luring more foreign travelers, have proposed to the government to expand the visa waiving policy to key markets.

The HCMC Tourist Association has sent a dispatch to relevant ministries, asking to waive visas for the citizens of Australia, New Zealand, the US, Canada, Austria, the Netherlands, Belgium, India and Uzbekistan.

Bui Ta Hoang Vu, director of the HCMC Tourist Department, had proposed to expand visa waivers for travelers from New Zealand, India, the Netherlands, Canada, the US and Australia.