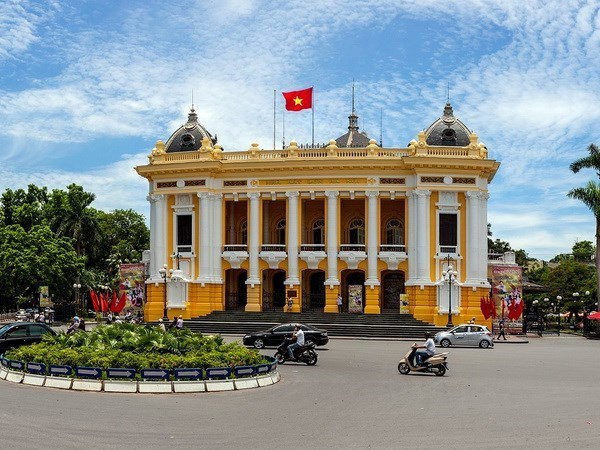 The Hanoi Opera House, one of the architectural landmarks of the capital city. (Photo: VNA)

The event was organised by the museum in collaboration with the Hanoitourist Corporation (Hanoitourist) to adapt to the current COVID-19 pandemic and adjust the museum's operations in the new normal.

Speaking at the launching ceremony, Nguyen Thi Thu Hoan, deputy director of the museum, said the "French architecture in the heart of Hanoi" tour is a product that makes a difference for visitors to the capital due to a connection between the museum with related monuments in Hanoi as well as a connection in terms of architecture and history.

This tour combines traditional sightseeing with the application of automatic narration technology through scanning a QR code to ensure the safety of visitors in the new normal, she said.

In particular, visitors can also admire and learn about three among many rare and precious treasures only at the Vietnam National Museum of History. They are "Ngoc Lu bronze drum" and the golden books and seals - the treasures symbolising the supreme power of the kings of the Nguyen Dynasty, the last feudal dynasty of Vietnam, Hoan said.

Phung Quang Thang, Director of Hanoitourist, said that after the fourth wave of COVID-19 infections, all tourism activities have changed to a new form, operating in the context of living with COVID-19, flexible and safety adaptation which required travel firms to have safe tourism programmes and activities. Therefore, Hanoitourist and the Vietnam National Museum of History collaborated to set up a safe tour that last about one hour and a half, he said.

The unique feature of the tour is the connection of three attractions, helping visitors to have an overview, identification and comparison to see the outstanding value of architectural works and styles, and interactions between Vietnamese culture with Western culture in the early 20th century.

It connects events and artifacts displayed in the Vietnam National Museum of History with the Hanoi Opera House and the historical relic of the Bac Bo Phu (now became the Government Guest House) from the perspective of architecture and historical events, thereby helping visitors understand more deeply as well as having new experiences in the tour.

To ensure safety, each tour group will have no more than 10 members and they have to keep a distance and do not contact with each other.

The "French architecture in the heart of Hanoi" tour will be held every Saturday and Sunday, starting on October 23.

Tourism authorities are working to encourage Hanoians to visit local places of interest, and travel firms also view this as an appropriate measure as the capital city have yet to reopen to tourists from other localities.

In a recent interview, Director of the municipal Tourism Department Dang Huong Giang said her department has proposed four stages of tourism reopening on the basis of the Health Ministry’s guidelines for safe adaptation to the pandemic.

In revent years, Hanoi has been emerging as one of the most attractive destinations in the region and the world.

According to the 2021 TripAdvisor Travelers’ Choice Awards, the city was one of the four Vietnamese cities listed among the most popular destinations in Asia in 2020. On the list, Hanoi ranked second, ancient town Hoi An in central Quang Nam province fourth, Ho Chi Minh City 11th, and central Da Nang city 16th. The capital city was also ranked the sixth place among the 25 most popular destinations in the world by Tripadvisor.