Luxury hotels no longer lit up at night, fall into crisis

The latest report of the department showed that because of Covid-19 and the short National Day holiday (which lasted only one day), accommodation establishments were poorly patronized, though they reduced their service fees by 40-60 percent. 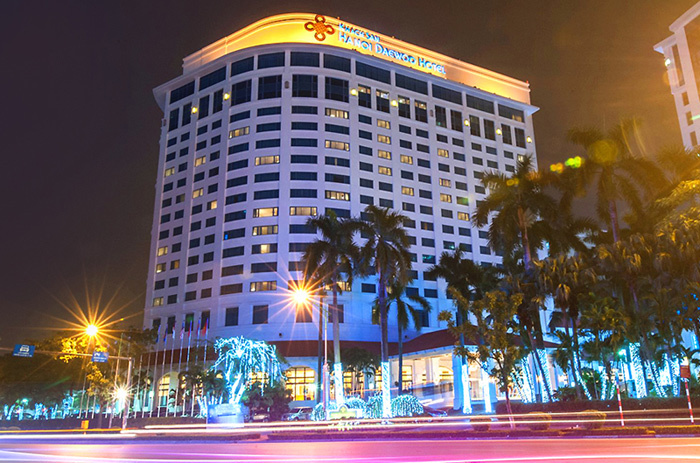 At Pan Pacific, the hotel room rate has been cut by 40 percent to VND1.9 million for one night in a deluxe room. The hotel offers a gift of VND500,000 for food service and 30 percent discount for dining at the restaurant and bar.

Meanwhile, InterContinental Hanoi Landmark 72 offers rooms at VND4 million a night with many preferences. At Metropole, the room rate was slashed to VND3 million per night.

However, the number of guests booking rooms has been very modest, which has led to low occupancy rates, just 10.6 percent for 1-5-star hotels on average, a 53.4 percent decrease compared with the same period last year.

Luxury 3-5 star hotels such as Hilton, Hanoi Opera, Melia, Authentic Hanoi and Thang Loi have suffered the most because they mostly serve foreign travelers.

According to the General Statistics Office (GSO), only 16,300 foreigners came to Vietnam in August, an increase of 16.9 percent over July.

They were mostly Chinese and South Korean specialists working for projects here, drivers who transport goods at road border crossings, and Lao and Cambodian students returning to Vietnam to study.

In the first eight months of the year, the number of foreign travelers to Vietnam was 3.8 million, a decrease of 66.6 percent from the same period last year.

In Hanoi, because of the second Covid-19 outbreak, hotels, restaurants and shopping and entertainment centers all reported very low sales, with revenue dropping by 80 percent compared with the same period last year.

In general, revenue from tourism nationwide in the first 8 months of the year was VND13.1 trillion, a decrease of 54.4 percent over the corresponding period last year.

Because of the second outbreak, the plans to stimulate domestic travel demand could not be implemented. Travelers cancelled tours, and many cultural festivals were postponed, while some tourism sites had to close again.

Vietnamese hotels put up for sale amid tourism slump

The hotel market has been in a state of hibernation since the beginning of the year because of the COVID-19 pandemic.