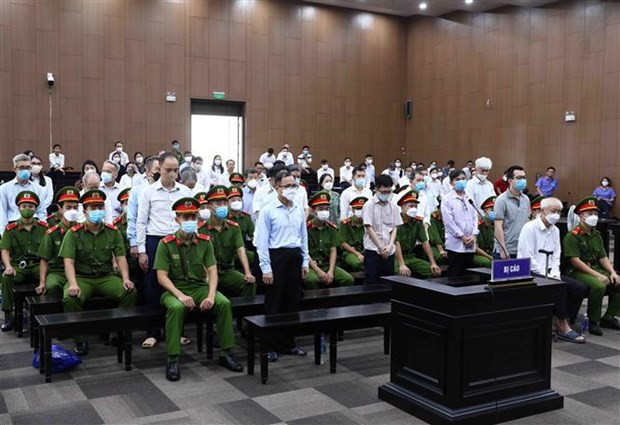 At the trial (Photo: VNA)

The defendants include 59-year-old Tran Van Nam, also known as Tran Quoc Tuan, former Secretary of the Party Committee and former Vice Chairman and former Chairman of People’s Committee of Binh Duong province, and 12 others who are also former officials and leaders of the locality.

They were prosecuted by the Supreme People’s Procuracy for “violating regulations on managing and using State assets, causing losses and wastefulness” in line with Article 219, Clause 3 of the 2015 Penal Code.

Of the 28 defendants, 26 were present at the court, while two others were absent due to childbirth and health reasons.

According to the indictment, Tran Van  Nam who was Vice Chairman and then Chairman of People’s Committee of Binh Duong from July 2020 to December 2015, and Secretary of the provincial Party Committee in the 2015-2020 tenure; Tran Thanh Liem who was  Chairman of the People’s Committee from October 2015 to October 2020; Pham Van Canh who was Standing Deputy Secretary of the provincial Party Committee from December 2013 to November 2018; and Nguyen Van Minh, Chairman of the Council of Members and General Director of Binh Duong Producing and Trading Corporation (Protrade Corp) from August 2010 to June 2017,  deliberately violated legal regulations on capital and asset management, causing huge losses to the State.

Specifically, although Nam knew that the proposal to apply the average land price in 2006 to collect land use levy under land allocation regulations in 2012 and 2013 was illegal, he still issued a document on land use levy collection from Protrade Corp, causing a loss of more than 716 billion VND (30.6 million USD) to the State.

Other former provincial leaders knew that the transfer of 43 hectares of land and the State's 30% stake in Tan Phu Company to individuals by Minh and his accomplices was unlawful. However, they still legalised procedures to enable Minh to complete the transfer of State assets to a company founded by his son-in-law and sold to another private company, causing a loss of nearly 985 billion VND.

The defendants also breached the rule when failing to verify the value of a 145-ha land lot during the process of equitisation, enabling Minh and other accomplices to cause a loss of over 4.03 trillion VND to the State.
The indictment said Nam must bear the main responsibility for his wrong decisions and instructions that resulted in heavy damage to the State asset, while Minh is the culprit.

The trial is expected to last for 20 days./.
Source: VNA