Throughout their development, they have found abundant food sources in their natural surroundings, which are tasty, nutritious and, in some cases, can prevent or cure illness.

Throughout their development, Mường people have found abundant food sources in their natural surroundings, which are tasty, nutritious and, in some cases, can prevent or cure illness.

Here are a few of the most popular Mường dishes.

This dish is undoubtedly a little scary for many people. Between September and October, many worms appear to feed on bamboo plants, which the Mường people collect from the forest. 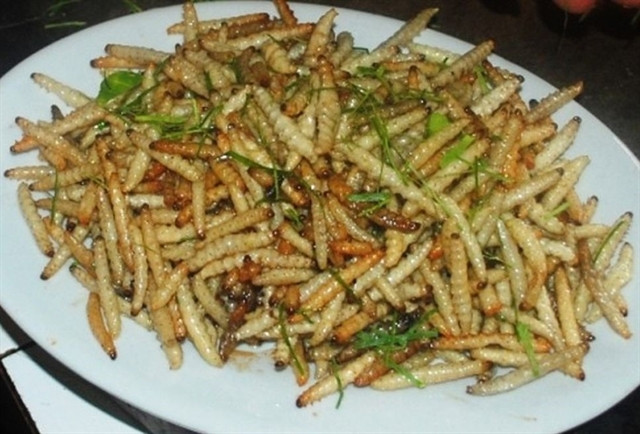 Bamboo worms are said to contain lots of vitamins and protein and be easy to digest. — Photo Lê Anh

The grubs can be cooked in various ways, such as stir-fried or roasted. The dish is popular in everyday meals or as a snack for men while drinking wine.

The worms are believed to contain a lot of vitamins and protein, which can be easily digested.

Grilled pork wrapped in pomelo leaves is one of the more common dishes. Young leaves that are shiny, green, and are flexibly chosen for the dish.

Pomelo trees, which bear a bitter-tasting fruit, are selected for the fragrant flavour of their leaves, which also boast high levels of essential oils.

The pork is home-raised. Lean and fat meat is minced or cut into thin slices and then marinated with minced onion, fish sauce, pepper, hạt dổi (Michelia tonkinensis seeds), and other spices.

The mixture is left for at least 15 minutes before each slice of pork is wrapped in a single leaf and held together by a toothpick during grilling.

The chef must turn the rolls over and over, so they do not burn. When the leaf turns grey, the pork inside is done. The pork is then served dipped in green pepper and salt mixed with the baked hạt dổi.

The Mường people consider this dish to have medicinal properties. 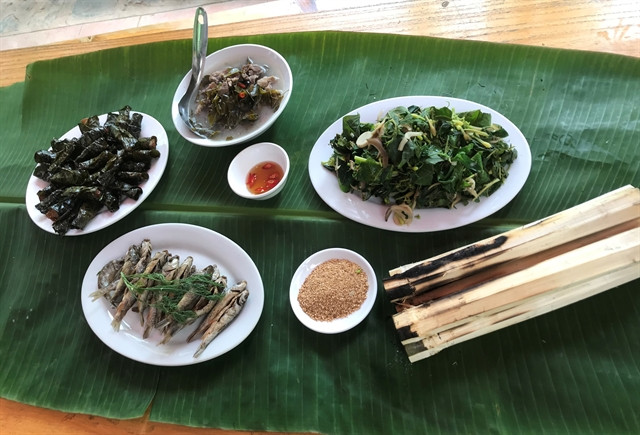 Sticky rice steamed in a bamboo tube is a dish typical of the Mường, combining the fragrance of sticky rice grown with the sweetness of the bamboo.

The rice should be freshly harvested and flavoursome.

It is washed and soaked in water for up to six hours, then drained in a basket before being stuffed in bamboo tubes. Water is poured down the tubes to immerse the rice. The tubes are then covered with a banana leaf before being baked over charcoal.

It should be turned over and over to avoid burning the rice. When steam starts to come out of the tubes and the fragrance of the rice fills the air, it’s time to eat.

The tubes are cut, leaving only a bamboo membrane surrounding the rice. The steam sticky rice is served with salted roasted peanuts and sesame.

This is a simple yet significant dish of the Mường people.

After being baked for some time, the buffalo meat is cut into thin slices and marinated with spices and fish sauce. The meat is then stirred and boiled until it becomes soft. A handful of lá lồm (sour-soup creeper) is added to the pot, which is boiled for five more minutes and then served. 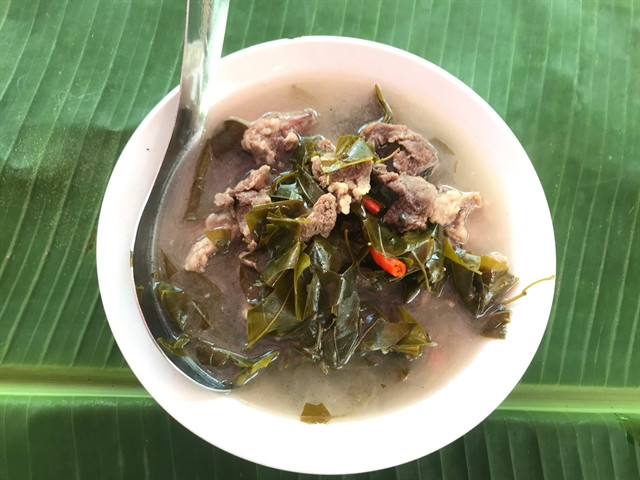 The soup is tasty with the slightly fatty yet soft buffalo meat. — Photo Lê Hương

It’s said that saponin in the leaves has an antiseptic function that kills bacteria like salmonella. The leaves are also used for digestion problems and aches and pains in the bones and joints and for treating skin ulcers.