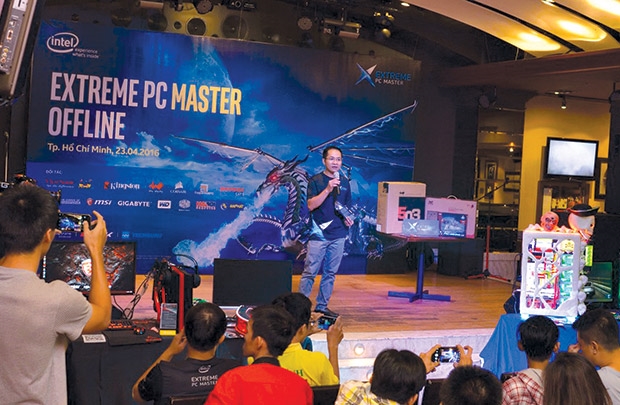 Like audio device and motorcycle players, hi-tech players always try to find ways to optimize design and the appearance of computing products so as to create original characteristics for the products.

The trend began in Vietnam in the early 2000s.

According to analysts, there are two schools in computer tweaking. The first is Overlocker, increasing the CPU’s speed to the highest possible level through different ways, from increasing the current intensity to shifting to liquid (water or refrigerated nitrogen) to cool computers instead of fans.

The other is Modding, which focuses on aesthetic design. Modding began when users dismantled components and assembled new accessories in computers to satisfy their hobbies or experiments.

In order to do this, they needed a space large enough for dismantling and assembling.  Therefore, they thought of rearranging components and accessories.

In Vietnam, the number of Overlocker people remains modest, because users must have deep technical knowledge about computers.

However, Modding has gathered many fans recently, because it allows users not only to design products which can satisfy their hobbies, but also allows them to earn money.

Khanh Hung, a man in district 3 in HCM City, said he was very proud of the computer he tuned.

“When people see the special and original computer I put on my desk, they admire it,” Hung said.

As for Modding, according to Nguyen Thuong Kiet, the administrator of Techguru, there are two sub-branches: Modding case and Scratch build.

All the products created must satisfy different requirements, from the idea to aesthetics, to complexity to level of completion.

Realizing that this is a potential market, technology firms worldwide are providing more components, technical guidance and more Overlocker and Modding competitions to attract players and advertise their brands.