The oil price surged by 1 percent on the same day after it increased by 3 percent last week because of tensions in the Middle East triggered by the US attack at the airport. 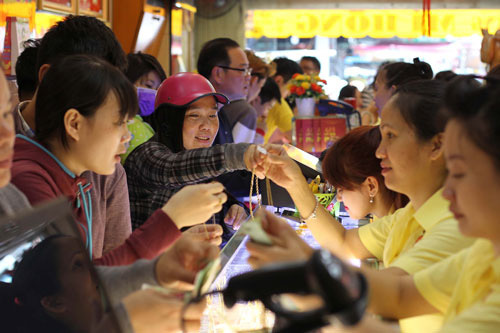 On January 6, SJC gold was quoted by goldsmith companies in HCM City at VND43.85-44.45 million per tael. As such, the price soared by VND2 million just within several days, or 1/3 of the increase of VND6 million in the whole year of 2019.

Tran Thanh Hai, a respected expert in gold, said on January 3-6, the gold price in the world soared by $200/oz, pushing the domestic price up to VND44.6 million from the previous level of VND41 million.

The expert went on to say that the events in the Middle East, plus the situation in the Korean peninsula, may weaken the US dollar and push the gold price up.

Besides, the increase in the demand for gold from China, South Korea and Vietnam at the end of the lunar year will also push the gold price up.

According to Hai, if the gold price increases slightly by VND2-3 million per tael, people would stay outside the market, but if the price increase is VND4-5 million, they will join the market. The 16 percent increase last year and the sharp rise in the first days of 2020 all ‘will make gold glitter’.

Nguyen Hoang Minh, deputy director of the HCM City branch of the State Bank of Vietnam, confirmed that the gold price is fluctuating heavily. However, only the price fluctuated, while the number of transactions did not.

Nguoi Lao Dong quoted an expert as saying that the tensions in the Middle East donot have direct impact on Vietnam’s important export markets such as the US and China, so it is highly possible that Vietnam will fulfill the 2020 export plan and three will be no need to adjust economic goals.

However, Vietnam needs to prepare for the scenario that the transport route through the Middle East may stagnate and that trade through this area to other markets may be affected.