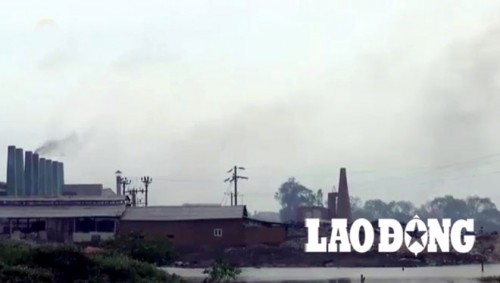 Cancer and tuberculosis cases have occurred, and fear has pervaded homes in the village.

The commune’s healthcare center sometimes receives four to five children with respiratory infections a day. Some of the patients were seriously ill and had to be transferred to big hospitals for further treatment. About 60-70 percent of old people suffer from chronic respiratory diseases.

Nguyen Van Duy, head of the healthcare center, said the number of people who had cancer or had died of cancer has increased in recent years. About 30 people in Van Mon die a year, including 20 cancer patients.

Duy said locals understand that recycling metals is a dangerous career, but with the current natural conditions, it is impossible to develop agricultural production in the locality.

In summer, dust and black smoke, together with terrible heat, attack the people. In the rainy season, hazardous waste is brought to every house by rain water and floods.

Trees in the village cannot grow: they stunt, wither and die. Fish and shrimp cannot exist. The houses near production workshops have to close their doors.

A report shows that 90 percent of Man Xa’s laborers take jobs relating to aluminum and lead recycling, or scrap transport. And most of them do manual work in the environment with no protective wear.

Nguyen Duc Phuc, chair of Van Mon Commune, said there are about 20 large-scale aluminum, lead, copper and zinc recycling workshops, each of which has 15-20 kilns in the locality.

Every household in the locality also has its own small production workshop.

It is estimated that each of the kilns consume 12-14 tons of fuel. The smoke from the kilns is discharged directly to the environment without going through any treatment process.

This is why the lead concentration in the environment is always tens times higher than the permitted level.