Chairman of the National Assembly of Vietnam Nguyen Thi Kim Ngan met with top legislators from the Republic of Korea and Iran on the margins of the IPU-137 in Saint Petersburg, Russia, on October 15.

Chairman of the National Assembly of Vietnam Nguyen Thi Kim Ngan met with top legislators from the Republic of Korea (RoK) and Iran on the margins of the 137th Inter-Parliamentary Union Assembly (IPU-137) in Saint Petersburg, Russia, on October 15. 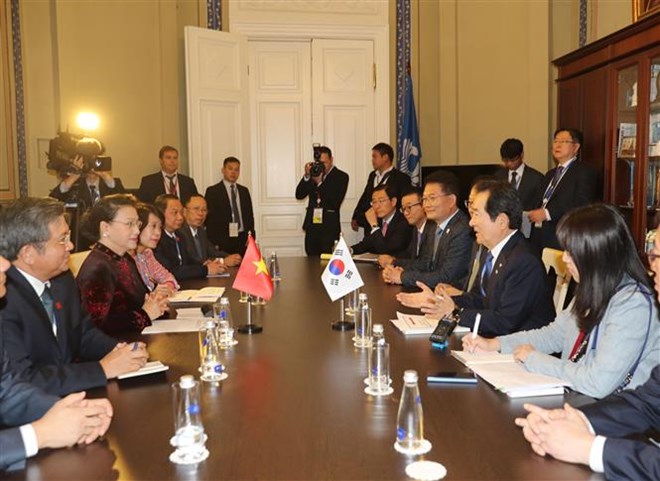 She asked the two nations’ parliaments to increase exchanges and coordination to examine the implementation of signed cooperation agreements while supporting the governments to prompt connectivity of friendship parliamentary groups according to the cooperation agreement signed between the two legislatures in July 2013.

The two sides need to coordinate at multilateral parliamentary forums such as the IPU, the ASEAN Inter-Parliamentary Assembly, and the Asia-Pacific Parliamentary Forum, she said.

She invited the RoK’s top legislators to attend the 26th Asia-Pacific Parliamentary Forum in Hanoi in January 2018.

The RoK’s Speaker expressed his pleasure to meet Chairwoman Ngan again after his recent visit to Vietnam. He said that RoK President Moon Jae-in is scheduled to participate in the APEC Economic Leaders’ Week in Vietnam’s central city of Da Nang in November 2017.

At a meeting with Speaker of the Parliament of Iran Ali Ardeshir Larijani, Ngan said Vietnam treasures traditional ties with Iran. 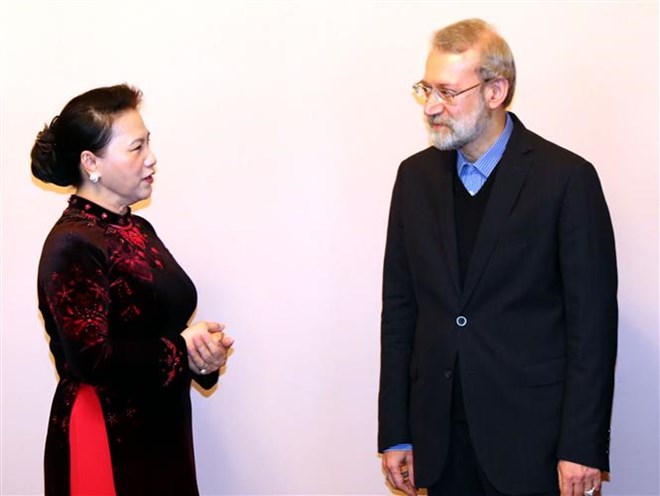 She noted that Vietnam and Iran agreed to strengthen cooperation in agriculture, seafood, energy, mining, oil and gas, telecommunication and banking during the ninth meeting of their Joint Committee in July.

The two countries’ leaders also agreed to soon bring bilateral trade to 2 billion USD, she said, calling on the two sides’ ministries, departments and localities to strengthen coordination to step up the implementation of signed cooperation deals.

The Iranian Speaker said a delegation from the Iran-Vietnam friendship parliamentary group will visit Vietnam at the end of October this year, adding that the visit demonstrates the interest of the Iranian parliament in working with the Vietnamese National Assembly.