If Covid-19 is contained by Q2, exports will bounce back and the 7-8 percent export growth rate in 2020 will be within reach.

The General Department of Customs (GDC_ reported a trade surplus of $2.8 billion in Q1, though the epidemic has affected consumer demand in many countries. Key export items such as computers, electronics, phones, woodwork and footwear all brought higher turnover compared with the same period last year. 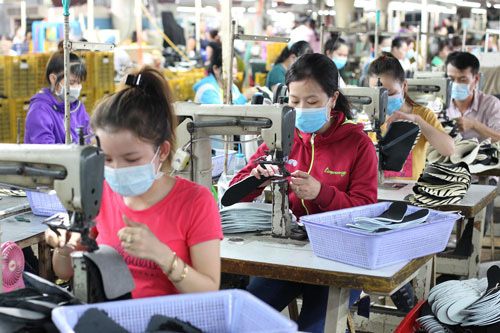 Despite the epidemic, Vietnam exported $9.06 billion, while imports decreased by 13.2 percent to $6.2 billion.

Regarding export markets, except the US and China, which cut imports from Vietnam, other important markets saw increases in imports.

The export turnover to Japan, for instance, reached $802 million, a 2.72 percent increase. The exports to ASEAN brought turnover of $970 million, up by 16.4 percent.

Phan Minh Thong, general director of Phuc Sinh JSC, said the company’s exports in Q1 were 120-130 percent of the exports of the same period last year.

“Our factory is still running with 1-2 production shift a day to satisfy big demand from clients,” Thong said, adding that the company can maintain export growth thanks to the policy on diversifying export markets.

The footwear industry, which complained earlier this year that they lacked input material for production because of the Chinese supply interruption, maintained exports thanks to old orders.

According to Tran Quang Vinh, chair of Phuc Yen Shoes in Vinh Phuc province, many clients have asked to delay deliveries until June and July. However, the company can export the products under the contracts signed last year.

The company believes it can maintain production until the end of April.

Pham Tat Thang, senior researcher at the Ministry of Industry and Trade, warned that exports would meet bigger difficulties in Q2, but in the long term, if the epidemic can be contained in Q2, exports may make a breakthrough in the second half of the year thanks to the demand recovery in many markets.

Thang believes that Vietnamese enterprises need to pay attention to the Chinese market as the country has initially succeeded in controlling the epidemic.

“The recovery time may be May for the Chinese market, and July or August for the US and European markets,” Toan said.

Farm exports to EU and US stuck, Vietnam looks to China, ASEAN

In order to export $42 billion worth of products as planned, exports to China need to grow by 10 percent and to ASEAN by 9 percent to offset the decline in exports to the US and EU.