Vietnam has many PhDs, few achievements 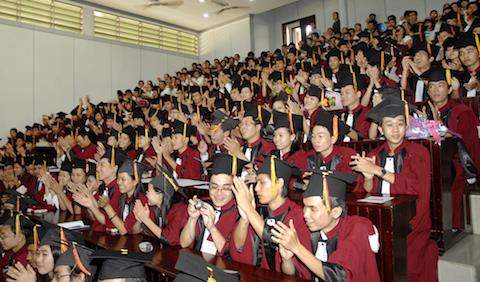 Hung has been making great contributions to the development of Vietnam’s science and technology.

According to the Ministry of Science & Technology’s Information Agency, Vietnam has 24,000 PhDs.

Meanwhile, according to the International Science Institute (ISI), in 1996-2011, Vietnam only had 13,172 scientific articles in prestigious publications, which was just equal to 1/5 of Thailand’s, 1/6 of Malaysia’s and 1/10 of Singapore’s.

The figure shows Vietnam has many scientists with a doctorate, but has few ISI recognized scientific works.

Hung, who has spent 20 years on helping Vietnam train masters and PhDs, said the figures did not surprise him at all.

“In Vietnam, the number of authentic doctors with real capability out of the people with doctorates proves to be too small,” Hung said in an interview with Dat Viet.

The hot topic on education forums these days is that an institute of social sciences can produce one PhD every one day.

Doctoral dissertations with odd or obscure themes have been produced for 50 years.

Meanwhile, the questions about the massive death of fish in Vung Ang waters in Ha Tinh province, the drought in Mekong River Delta and the failure in plant varieties have not been solved.

Since such intricate problems still exist in Vietnam, it is understandable why it produces few scientific works and technological inventions.

Hung thinks that Vietnam has excellent scientists, but they are not in the right positions to be assigned the tasks. The officials who have the right to make decisions, in many cases, are incapable.

It is very costly to produce a PhD. Training establishments say the total tuition a postgraduate has to pay to obtain a doctorate is VND50 million.

However, postgraduates affirmed that the reported figure is just nominal. The real cost is 20 times higher, about VND1 billion.

Therefore, analysts commented it is a big waste of money that while tens of trillions of dong have been spent to produce tens of thousands of PhDs, many PhDs cannot be used in reality.

More seriously, when the ‘useless’ PhDs are put into important positions, they not only cannot make contribution to the country’s science & technology development, but also hinder talented scientists to devote themselves to the country’s development.

Mentioning that 9,000 PhDs in Vietnam do not give lectures at universities and do not follow scientific research, Hung noted that the situation seems to exist only in Vietnam.