South Korea has asked Vietnam to join a multi-national bid for UNESCO’s recognition of lacquer as an intangible cultural heritage of humanity, according to Vietnam News Agency.

South Korea has asked Vietnam to join a multi-national bid for UNESCO’s recognition of lacquer as an intangible cultural heritage of humanity, according to Vietnam News Agency. 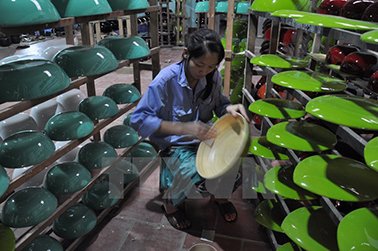 The Ministry of Culture, Sports, and Tourism is seeking the Prime Minister’s approval to join forces with Korea and other countries to look for UNESCO’s recognition of the traditional lacquer craft.

The Cultural Heritage Administration of Korea wrote to the ministry in mid-September last year asking for coordination in preparing a multinational file proposing the UN agency put the art of lacquer on the representative list of the intangible cultural heritage of humanity.

The recognition will help preserve and promote the values of lacquer and bolster multi-national cooperation in protecting this art. The Vietnam News Agency quoted a Korean source as saying that China and Japan may join the bid.

The lacquer has been existent for a long time in East and Southeast Asia including China, Japan, Vietnam, and Korea.

In Vietnam, lacquer has a long history and has evolved from traditional handicraft to fine art or even visual art (lacquer paintings), which features values of culture, art, history and science.

Late painter To Ngoc Van used to say that “son mai” (lacquer) was derived from the phrase “son ta”, which means a lacquer technique.

In the past, the Vietnamese used this technique to decorate worshiping objects and handicrafts. In the 1930s, some of the first students at the Indochine Fine Arts School including Nguyen Gia Tri, Pham Hau, Nguyen Khang, Tran Van Can and Dinh Van Thanh applied the technique to make lacquer paintings.

Last year Vietnam also coordinated with Cambodia, Korea and the Philippines to make a joint bid for UNESCO’s recognition of the tug-of-war game as an intangible cultural heritage of humanity.