Vietnam is among best-growing stock markets 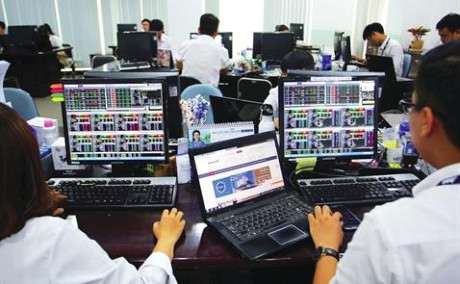 The continued increase of the VN Index (which has exceeded the 800 point threshold), the continued purchase of foreign investors and the accelerated state’s disinvestment from big corporations will create sustained growth in the market, according to Pham Luu Hung from the Saigon Securities Incorporated (SSI)

The Vietnamese stock market has been prospering beyond expectations since the beginning of the year. The VN Index officially surpassed the 800 point threshold on September 8. The sessions with trading value of VND5 trillion are regularly seen this year, while the average trading value was VND3 trillion only in 2016.

Foreign investors have always been net buyers in the last eight months with the total net purchase value of $1.31 billion, according to the National Finance Supervision Council. Of this amount, $650 million was disbursed for stocks.

Bloomberg commented that Vietnam was an exceptional case as foreign investors were  net buyers in the first eight months of the year.

In other markets such as Malaysia and Taiwan, investors sold more than bought during seven months, while in the Philippines and South Korea, net sales were seen during six months.

According to Ban Viet Securities, the Vietnamese stock market was the best growing market in the region and even better than Thailand, Indonesia and the Philippines.

Nguyen Hong Diep, director of the HCMC Branch of SHS Securities, believes that cash flow to the Vietnamese stock market would still be plentiful, while the VN Index may reach the 1,000 point peak by mid-2018.

Meanwhile, HCMC Securities believes that the VN Index will reach 920 or 960 points by the end of the year or earlier next year.

The presence of shares of large conglomerates such as Sabeco, Habeco, Novaland, VietJet, Petrolimex and VPBank has helped the market grow rapidly with total value of $100 billion, accounting for 57.4 percent of GDP, according to the National Finance Supervision Council.

Vietnamese investors make up 80 percent of total transactions. However, analysts believe that foreign investors will increase their presence in Vietnam as the State has announced its plan to divest shares in 406 enterprises in 2017-2020.

Foreign investors can also seek opportunities from the equitization and IPOs of state-owned enterprises (SOEs). It is expected that 130 companies will have IPOs in the next four years.

VN Sustainability Index to be launched in July