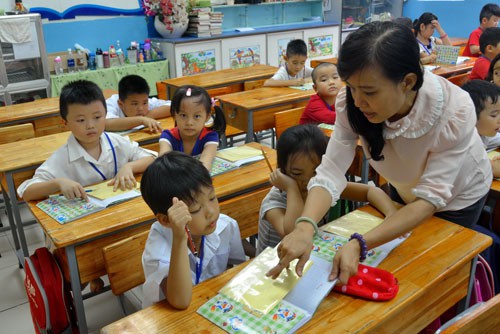 According to MOET Deputy Minister Nguyen Thi Nghia, by August 15, the country had 310 preschool teachers, a shortage of 40,000.

As for primary education, schools lack 19,000 teachers. Meanwhile, abundance and deficiency are both seen in secondary and high education levels. There are more than enough teachers in some localities and some subjects, but not enough teachers in other areas and other class subjects.

Nghia, confirming that the teacher shortage is serious in preschool education, explained that the number of teachers has increased in recent years, but cannot catch up with the increase in number of children.

Local authorities complained that since 2015, they have no ‘quota’ to recruit more teachers as the country is implementing the personnel streamlining policy.

The third reason that Nghia mentioned is the unreasonable programming and forecasting in localities. As a result, secondary and high education are facing an oversupply of teachers, while preschool and primary education are seeing a teacher shortage.

A report shows that schools throughout the country need to recruit 3,970 teachers to replace the retired. In addition, they need 3,900 more teachers to satisfy the increasingly high demand. This means that 7,000 new teachers are needed every year.

She admitted that the shortage has existed for several years but cannot be settled.

But she stressed that MOET alone cannot settle the problem because the ministry does not have the function of setting a recruitment plan, and managing teachers and officers in the education sector. The responsibility is being taken by people’s committees at different levels and the Ministry of Interior Affairs.

Experts also think the problem lies in the management mechanism. MOET, which best understands the teacher demand, does not have the right to recruit teachers.

Surveys have found that in the localities where heads of education sub-departments or schools are assigned to recruit teachers to work under contracts signed with local authorities, they can recruit good teachers.

Nguyen Xuan Khang, headmaster of Marie Curie School in Hanoi, thinks that it would be better to eliminate the permanent recruitment mechanism and recruit teachers to work under labor contracts based on their qualifications.

The teacher who inspires thousands of students