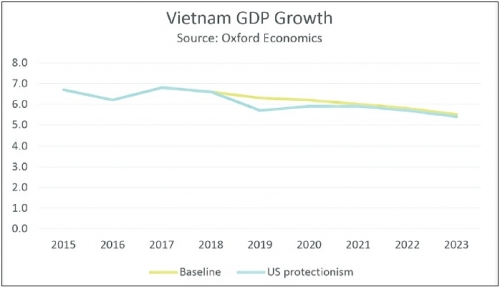 The industrial production index, especially in processing and manufacturing industries, is still high, but it shows a slowdown. It was only 9.1 percent in May, thus forcing the 5-month index down to 11.8 percent compared with the same period last year.

The problems existing in the economy, such as slow public investment capital disbursement and high logistics fee swill also adversely affect the GDP growth this year.

Meanwhile, merchandise trade has also slowed down with export turnover in the first five months growing by 15.8 percent only compared with the same period last  year, much lower than the average 20 percent growth rate in previous months.

Vietnam imported more than exported by $500 million in May, i.e the trade gap has returned after four months of trade surplus.

However, analysts pointed out that these problems are ‘not too bad’, because the slowdown is compared with the very high growth rate in 2017.

The World Bank’s report on the global growth prospects released on June 6 predicted a 3.1 percent growth rate for 2018, but this would be followed by a slowdown in the next two years.

WB has predicted that the GDP growth rate may reach 6.8 percent, or 0.3 percent higher than the 6.5 percent growth rate the organization showed in a report released in April.

Meanwhile, the Institute of Chartered Accountants in England and Wales (ICAEW) is less optimistic about Vietnam economy, predicting a slight decrease of GDP growth rate to 6.6 percent this year and to 6.3 percent in 2019-2020.


Sian Fenner from ICAEW said the institution believes the inflation rate in Vietnam will be curbed at 3.9 percent this year.

However, with the food & foodstuff price on the rise and the upward trend of the world’s oil price, the inflation may increase. In this case, Vietnamese policymakers will have to choose either lower growth rate or higher inflation rate.

The National Finance Supervisory Council estimates that if the oil price in 2018 increases by 17-20 percent over 2017 as predicted earlier this year ($60-62 per barrel), the price of transportation services would increase by 5-7 percent and the inflation rate by 3.5-3.8 percent.

Will high inflation return in 2017?