If Vietnam wants to apply foreign curricula, it can import textbooks in natural sciences and technology.

VietNamNet Bridge - If Vietnam wants to apply foreign curricula, it can import textbooks in natural sciences and technology. However, the structure of educational systems around the world is quite different and developed countries change curricula every five to seven years, according to Professor Nguyen Minh Thuyet, chief editor of the national curricula compilation committee. 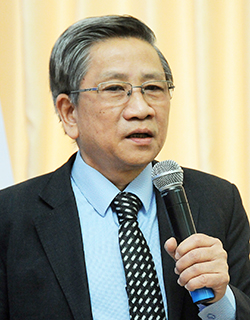 The draft curriculum for general education opened for public opinion by the Ministry of Education and Training has raised controversy.

Many people have criticized the curriculum, saying it cannot ease the workload of students. They said it would be better to apply foreign curricula to Vietnamese schools.

Thuyet said if Vietnam wants to apply foreign curricula, it can only import textbooks in natural sciences, foreign languages and technology.

Thuyet went on to say that the education systems of nations are different in structure. While Vietnamese students spend five years on primary education, four years on secondary education and three years on higher education, developed countries follow another formula.

He also said that in developed countries, curricula changes periodically. If Vietnam imports curricula, it will have to change textbooks accordingly.

Replying to the criticism about the heavy workload, Thuyet said the general curriculum is just a framework for general education.

People can make comments when the detailed curricula for academic subjects are made public, slated for July 2017.

The new program has fewer subjects than before, and the number of subjects is not higher than in other countries.

Primary school students now have 11 compulsory subjects and two compulsory educational activities. The number of subjects are expected to decrease to eight for first and second graders, to nine for third graders and 11 for fourth and fifth graders.

According to OECD (The Learning Environment and Organisation of Schools, 2009), the students from the first to ninth grades in member countries have 7,390 lessons (60 minutes per lesson). Meanwhile, Vietnamese students will have no more than 6,950 lessons.

Nguyen Minh Thuyet is a renowned expert in education and social issues. In 2004, as Deputy Chair of the National Assembly’s Committee for Culture, Education, Youth and Children, he warned that it would be a big waste if Vietnam spent too much of its resources on university education.