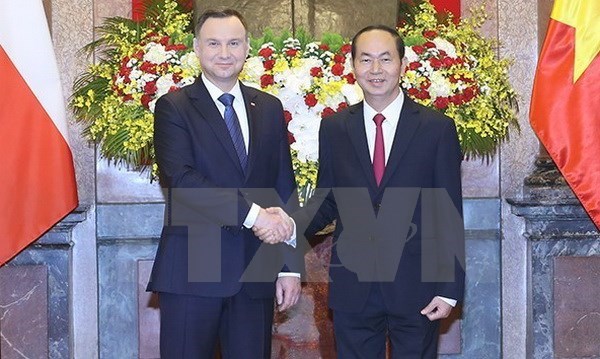 The two sides consented to regularly consult each other about regional and international matters of shared concern.

At the same time, they will closely coordinate and support each other at regional and international forums, particularly at the UN and within the cooperation frameworks of the Association of Southeast Asian Nations (ASEAN)-EU and the Asia-Europe Summit (ASEM).

President Quang used the occasion to thank Poland for supporting Vietnam’s candidacy for a non-permanent seat in the UN Security Council for 2020-2021, and called on the country to push for the early signing and ratification of the EU-Vietnam Free Trade Agreement.

The leaders lauded achievements in bilateral trade and investment cooperation as well as efforts made by the two countries in negotiating and signing a financial agreement worth 250 million EUR, creating a basis for the implementation of cooperation projects in Vietnam using official development assistance (ODA) provided by the Polish Government.

Discussing regional and international issues of shared concern, they stressed the importance of maintaining security and peace, and promoting cooperation and development in the world.

They held that all disputes should be addressed by peaceful measures, including the full respect for legal and diplomatic processes, in line with international law.

For his part, President Andrzej Duda thanked Vietnam for backing Poland’s non-permanent membership of the UN Security Council for 2018-2019.

The Polish President expressed his hope that documents signed during his visit, would create a foundation to step up collaboration between the two countries across fields.

The opening of the representative office of the Polish Investment and Trade Agency in Vietnam, slated for November 30, 2017, demonstrates Poland’s attention to developing economic and trade ties with the country, he said.

Two-way trade revenue reaches 2 billion USD, he said, expressing his belief that the figure will increase many times in the coming years on the basis of outcomes of his ongoing Vietnam visit as well as the upcoming visit to Poland by President Quang.

They also include memoranda of understanding between Vietnamese and Polish ministries, and the Vietnam News Agency and the Polish Press Agency.

An investment contract on pharmacy between Dat Vi Phu Pharmaceutical Co., Ltd. of Vietnam and ADMED Company of Poland was also signed on this occasion. 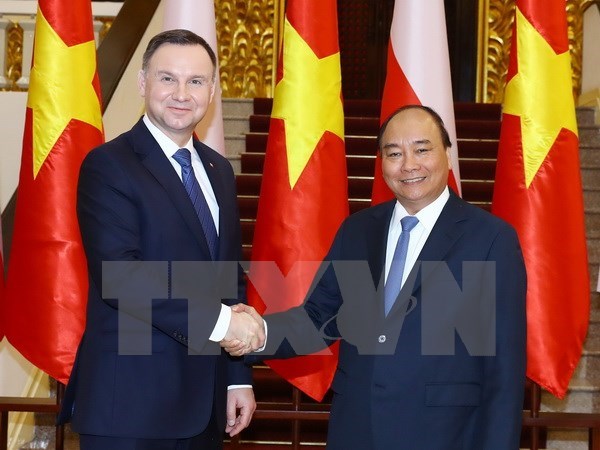 Visiting Polish President Andrzej Duda affirmed that the Vietnamese community in Poland plays a significant role in maintaining and developing the relations between the two countries.

He made the affirmation while meeting with Prime Minister Nguyen Xuan Phuc in Hanoi on November 28, noting he is particularly interested in promoting economic partnership with Vietnam, including tourism.

Poland wants to increase the number of tourists to Vietnam and promote balanced trade with the Southeast Asian country, he added.

Poland has chosen Vietnam as one of the top five potential countries to promote cooperation, he said, adding that the Polish Government will urge the EU to sign and ratify the EVFTA as soon as possible.

For his part, PM Phuc urged the two countries to reinforce the cooperation mechanisms and seek more effective ones as well as resume the meeting of the joint committee on science cooperation to aid the development of the sector.

The Vietnamese Government welcomes Poland to open its trade representative office in the southern economic hub of Ho Chi Minh City, he said.

He supported the two sides to promote cooperation in the fields of mining, shipbuilding, food processing and tourism as well as open a direct air route between Hanoi and Ho Chi Minh City and Warszawa.

The PM also lauded Vietnam and Poland for signing a cooperation agreement in education, of which Poland agreed to increase the number of scholarships for Vietnamese students.

He suggested the two countries enhance exchanges among students, especially in the field of Poland’s strength such as mining.

He hoped the Polish President will create more favourable conditions for the Vietnamese community to live in Poland.

She later visited the Temple of Literature in Hanoi, which was included in the list of 23 national special relic sites.

Later on the day, a State banquet was hosted by President Tran Dai Quang and his spouse for visiting Polish President Andrzej Duda, his spouse and entourage.

General Secretary of the Communist Party of Vietnam Central Committee Nguyen Phu Trong has assured President of Poland Andrzej Duda that Vietnam always treasures traditional friendship with Poland as well as its position and role in Europe.

During a reception in Hanoi on November 28, Party chief Trong hailed the visit as marking a new development of bilateral ties. He spoke highly of Poland’s active and practical support to Vietnam as well as Vietnamese nationals living in the host country over the past years.

Welcoming the outcomes of talks between the two Presidents during the visit, the host said he supports the further intensification of ties between the two States and peoples in fields of strength and demand such as mining, environment protection, agriculture and food processing.

Duda, for his part, affirmed that Poland attaches importance to strengthening friendship and traditional cooperation with Vietnam and vowed to realise signed cooperation agreements in the fields of economy, finance, education-training, agriculture, environment protection and media.

He informed the host about the opening of the representative office of the Polish Investment and Trade Agency in Ho Chi Minh City to further bilateral economic and trade ties.

The guest wished that the Vietnamese people would reap more achievements in the national development. 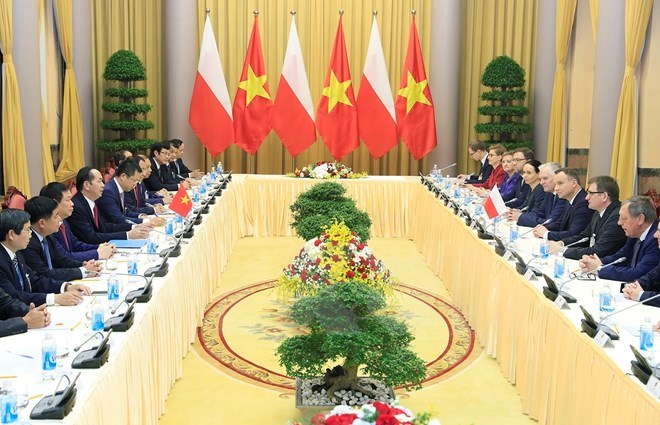 Duda, who is in a State visit from November 27-30, affirmed that Poland wants to nurture mutually beneficial ties with Vietnam in diverse areas.

Both sides agreed to facilitate the exchange of all-level visits via the State, government, National Assembly, business and local channels.

They spoke highly of close and effective coordination between the two nations on international arena. The Vietnamese President congratulated Poland on being elected as a non-permanent member of the United Nations Security Council for the 2018-2019 tenure.

Duda expressed his support for Vietnam’s run for a non-permanent member of the UN Security Council for the 2020-2021 tenure and the early signing and ratification of the European Union – Vietnam Free Trade Agreement (EVFTA).

The two leaders highly appreciated considerable progress of bilateral links across economy-trade-investment over the past years. Poland is now Vietnam’s largest trade partner in Central Eastern Europe while Vietnam is Poland’s seventh largest trade partner outside the EU. Two-way trade hit a record 790 million USD last year, and reached 730 million USD in the nine months this year, up 25 percent annually.

In the near future, Poland will soon disburse an official development assistance package worth 250 million EUR to Vietnam in line with a framework agreement on financial cooperation signed during the visit.

The two countries will actively realise the Memorandum of Understanding (MoU) on economic cooperation, firstly facilitating the inauguration of the representative office of the Polish Investment and Trade Agency in Ho Chi Minh City, thereby encouraging the two countries’ businesses to seek opportunities in fields of Poland’s strength and Vietnam’s demand such as mining, food processing, pharmaceuticals and environment protection.

They underscored the importance of boosting national defence-security ties and pledged to share experience in overcoming the consequences of bombs and mines and the UN peacekeeping mission.

Host and guest spoke highly of the signing of a tertiary education cooperation agreement with the increase in scholarships to the two nations’ students and graduates to 20 per year and a letter of intent on opening Polish language training courses between the Polish Ministry of Science and Higher Education and Hanoi University.

They promised to restore the Vietnam-Poland Joint Committee on Scientific and Technological Cooperation mechanism and convene its meeting next year.

The two Presidents welcomed the signing of a MoU on environment protection cooperation and consented to reinforce joint work in the treatment of garbage and wastewater and green technology.

President Quang hailed Poland for adding Vietnam into its list of 14 priority agriculture export markets and the signing of the MoU on agriculture collaboration during the visit.

He thanked the Polish State and government for providing all possible support for Vietnamese nationals living in the country.

Following the talks, both leaders convened a press conference and witnessed the signing of the above memoranda of understanding, a MoU on cooperation between Vietnam News Agency and the Polish Press Agency, and a contract on pharmaceuticals investment between Dat Vi Phu Vietnam company and the Adamed Group of Poland.

Later, both sides issued a joint statement on the outcomes of the visit.