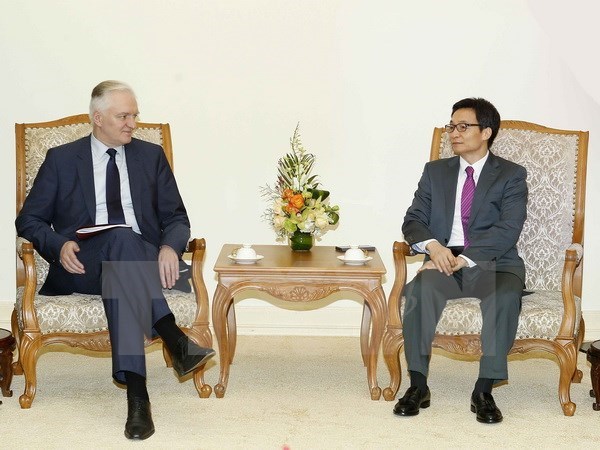 At the meeting, Dam stressed education and science-technology cooperation between Vietnam and Poland began in 1960, saying thousands of Vietnamese students and postgraduates have been trained in Poland.

Global integration and scientific-technological development bring about requirements and conditions for the two sides’ collaboration to grow further, he added.

They valued the signing of a university-level cooperation agreement pact between the Vietnamese Ministry of Education and Training and the Polish Ministry of Science and Higher Education.

The deal included the increase of their respective number of scholarships granted to the other side to 20 per year, particularly in the subjects of engineering, mining-geology, agriculture, and food technology.

He also mentioned the signing of a letter of intent on setting up a Polish course between Hanoi University and the Polish Ministry of Science and Higher Education.

Both host and guest highlighted coordination between relevant Vietnamese and Polish agencies in preparation for the next session of the Vietnam-Poland Joint Committee for Science-Technology Cooperation next year.

Vice Chairman of the National Assembly Phung Quoc Hien has called on the Vietnam-Poland and Poland-Vietnam Friendship Parliamentarians’ Groups to increase their exchange of delegations and legislative experience and support each other at multilateral forums and in regional and international issues. 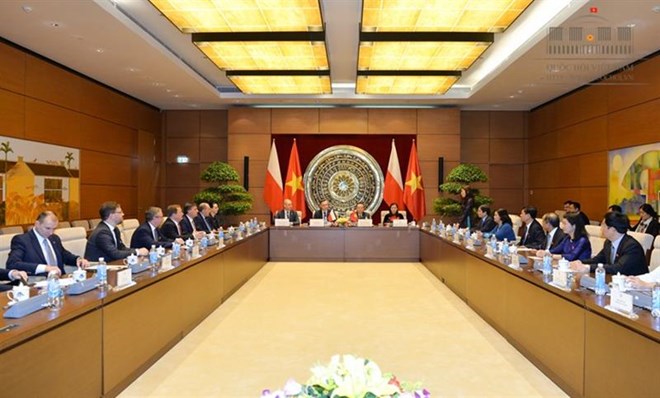 At the meeting (Source: quochoi.vn)

Speaking at the November 29 meeting of the two groups on the occasion of the ongoing State visit to Vietnam by Poland’s President Andrzej Duda, Hien hailed the outcomes of talks and meetings between the Polish President and Vietnam’s high-ranking leaders, expressing his belief that the visit marks a milestone and gives an impetus for the friendship and cooperation between the two countries.

Underlining the signing of a memorandum of understanding on economic cooperation, the NA official suggested the two nations continue building and completing a legal framework to facilitate economic cooperation, and resume the operation of the Vietnam-Poland Joint Committee on Science and Technology Cooperation.

He expressed his hope that Poland boosts signing and ratification of the EU-Vietnam free trade agreement, affirming that the deal will bringing about practical benefits to all stakeholders, including Poland.

President of Poland Andrzej Duda expressed his delight at documents signed during his visit, believing that they will contribute to consolidating the bilateral cooperation, not only in economy but also in science, education and training.

Poland has continuously attached importance to developing the traditional friendship and multi-faceted cooperation with Vietnam, he said, pledging that his country will accelerate the realization of the signed agreements on economy, finance, education – training, agriculture, environmental protection, and communication.

He also appreciated the role of the two parliamentarians’ groups in fostering the bilateral relations, expressing his belief that on the basis of the time-honoured friendship, the two nations’ relations will grow to a new height.

President of the Vietnam-Poland Parliamentarians’ Group Le Thi Nga suggested the two groups actively promote collaboration between them as well as between the two nations’ legislative bodies.

They should also enhance experience sharing in law and decision making as well as supervising operation of the state apparatus.

Agreeing with his Vietnamese counterpart, President of the Poland-Vietnam Parliamentarians’ Group Pan Grzegorz Napieraski hoped that the two groups would further the exchange of policies on agricultural development, business community, science and technology application and environmental protection, thus boosting the bilateral ties countries.-VNA