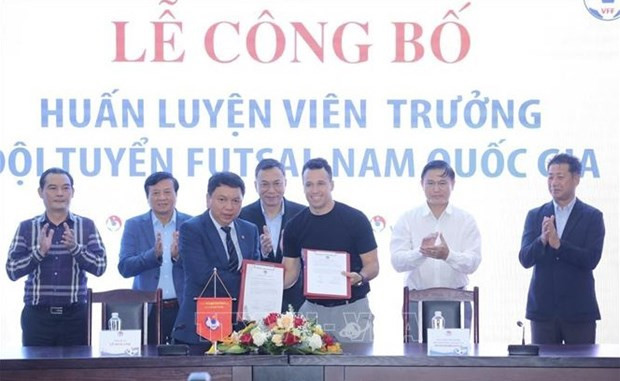 At the event (Photo: VNA)
Giustozzi Diego Raul is expected to lift the squad to new heights, starting with the 2022 AFC Futsal Asian Cup and then at the 2024 World Cup final.

Raul, of Argentine nationality and born in 1978, led his native country to win the 2016 Futsal World Cup in Colombia.

He is contracted to lead the Vietnamese team from August 1, 2022 to September 30, 2024.
In recent years, Vietnamese futsal has made strong developments, participating in the FIFA Futsal World Cup in Colombia in 2016. The national team appeared at the World Cup again in 2021 under the guidance of coach Phạm Minh Giang. At both tournaments, Vietnam reached the round of 16.

According to Tran Anh Tu, head of the futsal section of the VFF, to raise the level of the national team towards the goals set out, Vietnam needs the support of the world's leading futsal experts. That is also the reason why the VFF decided to invite coach Raul.

To improve the quality of Vietnamese futsal, in addition to gradually professionalising domestic futsal clubs through participation in the AFC tournament system, the national futsal tournament will also strive to be organized in the home and away field format, instead of at a centralized location.

The Vietnamese team are currently training at Thai Son Nam Gymnasium in HCM City until September 8.

Afterwards, the team will compete in an invitational tournament from September 9-17 in Thailand. Vietnam will have the opportunity to face quality rivals such as Iran, Morocco, Finland, Angola and host Thailand.

On September 24, Vietnam will go to Kuwait where they will compete in the AFC Futsal Cup, where they will face the Republic of Korea, Saudi Arabia and the last time's runners-up Japan./.
Source: VNA