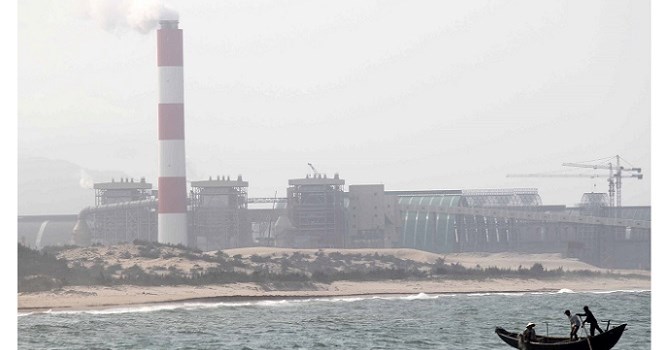 To date, state management agencies have not made any official conclusion about the reasons behind the mass fish deaths in the central region.

However, Taiwanese Formosa is believed to be the culprit. A fisherman in Ky Anh Town of Ha Tinh province discovered a pipe with the length of 1.5 kilometers and diameter of 1.1 meters which brings discharged water from Formosa to the sea.

The information immediately raised anger among the public. Netizens repeatedly criticized Formosa of damaging the Vietnamese environment, while commenting that the government should not have allowed Formosa, an investor with ill fame in many other countries, to enter Vietnam.

The Vietnamese public expressed anger when Formosa’s PR officer commented: “You have to choose either fish or a steel plant."

Though Formosa apologized for the statement, the behavior continues to upset the public.

Phan Huu Thang, former head of the Foreign Investment Agency (FIA), commented that the mass fish death case should be a lesson for state management agencies to learn how to attract FDI.

Thang said that Vietnamese agencies would never do what the Formosa’s representative advised to ‘choose either fish or steel plant’.

Vietnam wants to attract investments to develop the economy, but it will never sacrifice its environment for investment projects and capital.

Thang, who spent many years working as FIA’s director, spoke about Formosa’s ‘CV’.

Formosa is known as an investor which has caused many environmental incidents in other countries, which have also complained.

Thang said the ill repute alone was enough for Vietnamese agencies to add Formosa to the ‘black list’ of foreign investors that need to be supervised.

An analyst noted that while Japanese FDI in Vietnam had decreased, Taiwanese investment has increased rapidly in recent years.

He cited a Ministry of Planning and Investment’s report as saying that in the first four months of the year, Taiwan surpassed Japan to become the third largest FDI investor out of 101 foreign direct investors in Vietnam, while Japan has fallen to the fourth rank.

The analyst has called on to reconsider why Japanese investment in Vietnam has decreased, while Japanese are considered the most serious investors in Vietnam.

However, Thang denied this, saying that Japan always leads in terms of implemented capital.