Vietnam and Singapore have agreed to strengthen wide-ranging defence cooperation to further contribute to the bilateral strategic partnership.

Vietnam and Singapore have agreed to strengthen wide-ranging defence cooperation to further contribute to the bilateral strategic partnership. 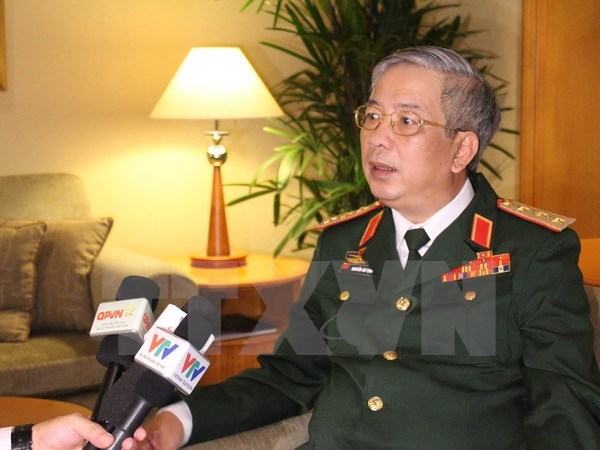 They consented to continue improving the efficiency of collaboration, including facilitating all-level visits and maintaining the deputy-ministerial defence policy dialogue mechanism, considering them as a pillar in bilateral defence ties through which strategic issues and joint work plans between the two armies will be discussed.

Both sides were also unanimous in exploring the possibility of expanding collaboration in the United Nations peacekeeping mission, including deploying forces to the UN missions that suits each country’s realities and meets the UN requirements.

Vietnam and Singapore will also seek the possibility of joining bilateral and multilateral drills on search and rescue in the foreseeable future.

On bilateral collaboration at multilateral forums, they shared views that the ASEAN Defence Ministers’ Meeting (ADMM) and ADMM Plus are effective mechanisms to strengthen strategic trust and contribute to regional peace, stability and development and that these mechanisms should be maintained to sustain solidarity and unity in ASEAN.

Host and guest unanimously supported each other at these forums by contributing more practical initiatives.

Vietnam particularly backs Singapore’s initiative on expanding the Code for Unplanned Encounters at Sea to include military and civilian vessels and aircraft, Vinh said.

Discussing regional and global issues of shared concern, they asserted that the region is facing security challenges, including terrorism, climate change and cyber security, particularly maritime security, which require the settlement by the community, not a single nation, in accordance with law and international standard.

Regarding security in the East Sea, they expressed their concern over the recent fresh, complicated developments which harboured risks and dangers in the area and called for fully abiding by international law, especially the UN Convention on the Law of the Sea 1982, stopping the illegal construction of man-made islands that changes status quo in the disputed area, refraining from threatening to use force and using force, and avoiding militarisation in the East Sea.

In the near future, parties concerned must conform to the Declaration on the Conduct of Parties in the East Sea and determinedly accelerate negotiations to reach a Code of Conduct in the East Sea (COC) soon.

The two sides hoped that the above stance will receive high consensus from the ASEAN member states as well as support from peace-loving nations for the sake of regional and global stability and development.

Vinh said Vietnam believes that Singapore, in its capacity as the coordinator of the ASEAN-China relations, will actively contribute to promoting the ties between the bloc and China ties and join in settling existing issues by peaceful means in line with international law.

He hoped that Singapore would help raise the responsibility of China and ASEAN for fully enforcing the DOC and formulating a COC.

Vinh thanked the Singaporean Defence Ministry for providing the Vietnamese partner with English training scholarships in Singapore as well as assisting Vietnamese officers who worked for the Information Fusion Centre – a regional maritime security information sharing hub hosted by the Singaporean navy.

During a reception for Deputy Defence Minister Vinh on March 1, Singaporean Minister for Defence Ng Eng Hen affirmed that Singapore attaches importance to defence ties with Vietnam and see the cooperation in the field as the sharing of responsibility towards the region.

Singapore always supports Vietnam’s initiatives and proposal for regional peace and also treasures the development of friendship and all-around links with Vietnam, he stated.

The host also took the occasion to convey his invitation to Vietnamese Defence Minister General Phung Quang Thanh to attend the 15 th Shangri-La Dialogue and pay official visit to Singapore in the coming time.