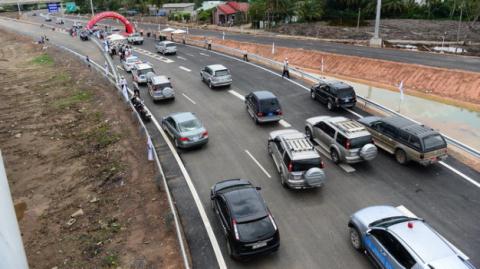 The Project Management Unit No 1 has proposed that the Ministry of Transport approve a plan to use Japanese ODA capital for the VND17.2 trillion Tan Phu – Bao Loc Highway project.

The expert went on to say that borrowing money for development is normal for economies.

“To date, Vietnam is still capable to pay debts. However, if the public debt continues increasing and exceeds the 65 percent of GDP threshold one day, the situation will be very bad,” Hieu said.

Vietnam recently had to swap debts by borrowing new money to pay old debts. This shows that Vietnam’s repayment capacity is decreasing.

“Remember that debt swap means that we cannot pay debts and we have to restructure the debts,” he said.

Nguyen Xuan Thuy, a transport expert, also said that using ODA to build infrastructure items is necessary because ODA capital is cheap, while ODA lenders offer grace periods and Vietnam can borrow capital for 20 or 30 years.

However, Thuy said it is necessary to think carefully about how much to borrow and what to use the capital for.

“ODA capital can be allocated if it is really necessary. ODA must not be used in a spontaneous way, because it is not free and it will lead to heavier public debt burden,” Thuy said.

Thuy said Japan has good relations with Vietnam and it wants to help Vietnam develop its economy.

In the case of the Tan Phu-Bao Loc highway project, he said the Japan International Cooperation Agency has shown special attention to the project because many Japanese investors are developing agriculture projects in Lam Dong province.

The UK has announced it will grant ODA to Vietnam from 2016. Some other countries including Finland and Norway have been gradually cutting ODA for Vietnam in 2016-2020.

The World Bank (WB) will stop providing capital from July 2017. And the Asian Development Bank (ADB), one of the three big funders, will be the next donor to do so.