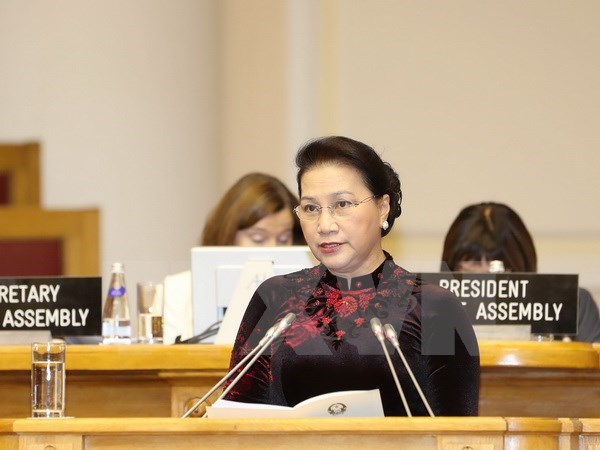 She was addressing the opening of the 137th Inter-Parliamentary Union (IPU) Assembly’s general debate in Saint Petersburg, Russia, on October 15, which was themed “Promoting cultural pluralism and peace through inter-faith and inter-ethnic dialogue.”

In 2013, Vietnam’s NA approved a new Constitution which prohibits any discrimination against any of the country’s many ethnic groups, the top Vietnamese legislator said.

The State has devised policies that create conditions for ethnic minority groups to contribute to national development.

She also urged increased supervision over the implementation of Government policies that protect the rights of members of all religions, ethnic and cultural groups, contributing to national unity.

It is necessary to review and scrap laws and rules manifesting discrimination to ensure the involvement of people from all walks of life in the country’s politico-socio-economic activities, the chief legislator said.

The IPU should encourage member countries to assess the efficiency of policies and laws towards ethnic and religious groups, while paying more heed to communications work so as to strengthen their cooperation, she said.

NA Chairwoman Ngan also proposed enhancing bilateral and multilateral cooperation between the countries and their legislative bodies in cultural, religious and ethnic affairs.

She called on the countries to join hands to improve public awareness of inter-faith and inter-ethnic dialogue.

Ngan appealed to the IPU to step up collaboration between legislative bodies of its member countries and UN mechanisms and international organisations, aiming to promote peace, cooperation and solidarity between nations, religions and cultures within each country as well as between countries.