Deputy Defence Minister Nguyen Chi Vinh on June 4 held bilateral meetings with representatives from the EU, the United Kingdom and Italy on the sidelines of the 15th Shangri La Dialogue to deepen ties in security and defence.

Deputy Defence Minister Nguyen Chi Vinh on June 4 held bilateral meetings with representatives from the EU, the United Kingdom and Italy on the sidelines of the 15th Shangri La Dialogue to deepen ties in security and defence. 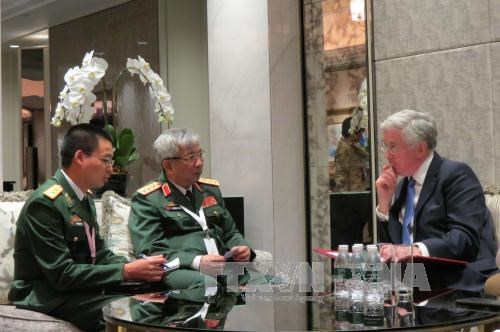 In his meeting with Managing Director Asia and Pacific for the European External Action Service (EEAS) Gunnar Wiegand, Senior Lieutenant General Nguyen Chi Vinh said Vietnam hopes to ramp up exchanges of high-ranking delegations and scholars and enhance cooperation in military training between Vietnam and the EU.

He also proposed the EU to share its experience with Vietnam in the United Nations’ peacekeeping operations.

For his part, Wiegand affirmed that the EU will continue strengthening partnership with Vietnam in many fields, especially in peacekeeping.

Regarding the East Sea issue, he said the EU supports negotiations between all concerned parties and hopes the Association of Southeast Asian Nations (ASEAN) and China to soon reach a Code of Conduct in the East Sea (COC) for the settlement of issues.

While meeting with British Secretary of State for Defence Michael Fallon, Vinh said Vietnam supports the UK to be an observer at the ASEAN Defence Ministers’ Meeting Plus (ADMM+).

In response, Fallon stated that the UK will provide favourable conditions for Vietnamese military officers to pursue training courses in the country. It will invite Vietnam to take part in a seminar on UN peacekeeping mission in London this September and coordinate with Vietnam in building a field hospital in South Sudan.

Pinotti said the two countries shares a common interest in maritime security and could bolster cooperation in the field. Italy also stands ready to share its peacekeeping experience with Vietnam, she added. 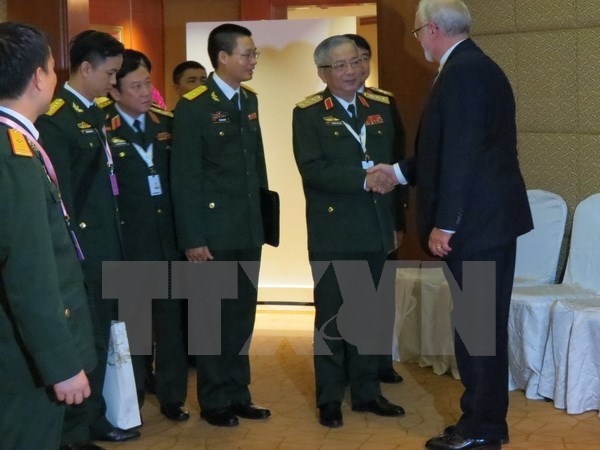 Deputy Defence Minister Nguyen Chi Vinh, head of the Vietnamese delegation to the 15th Shangri-La Dialogue, had bilateral meetings with representatives from a number of countries to discuss ways to intensify regional security on June 3 in Singapore.

In his meeting with US Assistant Secretary of Defence for Asian and Pacific Security Affairs David Shear, Vinh highlighted several issues related to the regional and international situations that concerns Vietnam, particularly challenges facing Asian nations.

According to him, Vietnam and the US can expand their defence cooperation, for the interests of both sides.

He expressed his hope that the US continues realising its commitments to supporting Vietnam in participating in the United Nations peacekeeping forces, addressing war aftermaths, detoxifying dioxin at Bien Hoa airport and releasing a map of unexploded ordnance left from the war in Vietnam.

Shear affirmed that the US will continue to help Vietnam participate in the US peacekeeping missions and handle war consequences.

He thanked Singapore for training officers for the Vietnamese army, especially in improving English language skills for peacekeepers, army medical corps, and teachers.

He suggested both sides intensify collaboration, and join exercises within the framework of the ASEAN Defence Ministers’ Meeting Plus.

The Singaporean official said that his country will actively carry out measures to boost cooperation between the two defence ministries on the basis of Vietnam’s proposals.

The Vietnamese officer also met with Chief of the Australian Defence Force Mark Binskin, during which they agreed to expand collaboration and intensify connectivity between research institutes and scholars.

Regarding cooperation in joining the UN peacekeeping missions and addressing war consequences, Vinh stated that Vietnam will make specific proposals, so Australia can take steps to further deepen the bilateral cooperation.

Binskin suggested exchanging groups of experts and scholars from which they make specific recommendations for the two countries’ cooperation directions.

In his meetings with representatives from Canada and New Zealand, Vinh confirmed Vietnam’s willingness to build practical and effective defence cooperation relations with these countries.

Also on June 3, Deputy Chief of the General Staff of the Vietnam People’s Army Vo Van Tuan also held bilateral meetings with representatives from the Japanese, Philippine and EU delegations.