The Dien Bien Phu Victory which ended the French colonial rule in Vietnam (May 7, 1954) was celebrated at a conference held by the Lao Ministry of Industry and Commerce in Vientiane on May 16.

More than 200 officials of the Lao Ministry of Industry and Commerce watched a documentary on the victory 65 years ago, which helped them understand more about the significance of the triumph to the revolutionary development of the three Indochinese nations of Vietnam, Laos and Cambodia, as well as the special solidarity and fighting alliance between Vietnam and Laos.

Vietnamese Defence Attache in Laos Colonel Tao Van Thai said the Dien Bien Phu Victory is the win shared by the people of the Indochinese nations, and the triumph of the Vietnam-Laos special solidarity and fighting alliance.

He thanked the Lao Party, State and people for their valuable, whole-hearted and effective support to Vietnamese revolution and people during the past struggle for national liberation as well as the present cause of national construction and defence.

Lao Minister of Industry and Commerce Khemmani Phonesena promised that the ministry will continue enhancing the special relationship between the two countries.

The Dien Bien Phu Campaign lasted for 56 days from March 13 to May 7, 1954 under the command of General Vo Nguyen Giap. It saw Vietnam defeat the French colonialists to put an end to their rule in Indochina in 1954.-VNA 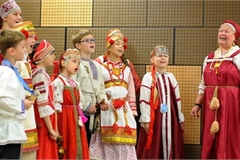