Speakers applauded the positive progress in Sudan and South Sudan, as well as many important strides in the two countries’ relations in the recent past. They said the countries have made certain efforts to resume dialogue in resolving the Abyei issue but also held that they have yet to attain many substantive results.

UN Under-Secretary-General Jean-Pierre Lacroix voiced his concern about the security situation in Abyei over the past months amid the COVID-19 pandemic, the escalation of violence among communities, and attacks on UNISFA.

He quoted UN Secretary-General Antonio Guterres as saying that there haven’t been any solutions accepted by the related parties towards the withdrawal of UNISFA in the coming time. He also called on the UNSC to extend UNISFA tasks for six months so that the parties concerned can continue seeking appropriate solutions to the Abyei issue.

Meanwhile, Special Envoy Parfait Onanga-Anyanga underlined the importance of enhancing the UN’s coordination with the African Union and regional countries to promote peace, stability, and communities in Abyei living peacefully side by side.

UNSC member states spoke highly of the continued improvements in Sudan-South Sudan relations but also expressed their concern about the recent developments in the security and humanitarian situation in Abyei.

They appealed to the two countries to soon seek peaceful solutions to the Abyei issue, reiterating their support for activities of UNISFA and the special envoy.

For their part, representatives of Sudan and South Sudan affirmed the two governments’ commitment to cooperating with UNISFA, stressing the countries’ recent efforts to boost dialogue to resolve the Abyei issue peacefully.

The Ethiopian representative said as the largest contributor of troops to UNISFA, Ethiopia will continue making contributions so that UNISFA can fulfill its duties.

Welcoming the strides in South Sudan and Sudan as well as in bilateral relations since the beginning of 2021, Ambassador Dang Dinh Quy, Permanent Representative of Vietnam to the UN, urged the two governments to make use of the positive momentum in bilateral ties to soon deal with the Abyei issue by peaceful means and on the basis of international law and the UN Charter.

He shared the concern about the security and humanitarian situation in Abyei, along with attacks on UNISFA.

The diplomat emphasised the importance of ensuring safety for the UNISFA force. He asked the governments of Sudan and South Sudan to create conditions for UNISFA to fully perform its tasks and to set up common institutions in line with relevant resolutions of the UNSC.

Quy also highly valued efforts by the UN, organisations, and regional countries to assist Sudan and South Sudan to peacefully handle the Abyei issue, lauding efforts by UNISFA and the UN Mine Action Service in dealing with humanitarian challenges, including those related to bombs and landmines in Abyei.

Sudan and South Sudan signed an agreement on the disputed Abyei region on June 20, 2011 under which they pledged to withdraw troops from the demilitarised zone. However, they haven’t obtained much substantive progress in the agreement implementation.

UNISFA, set up in 2011 under UNSC Resolution 1990, was tasked with protecting civilians and promoting demilitarisation in Abyei. It was supplemented with the duty of supporting the Joint Border Verification and Monitoring Mechanism (JBVMM) in this region under Resolution 2024 on December 14, 2011./. VNA 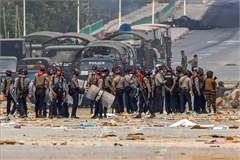